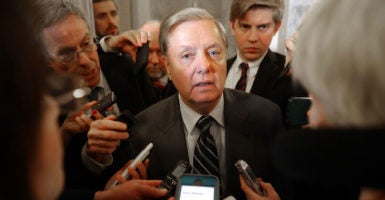 Sen. Lindsey Graham’s immigration reform bill would add 500 immigration judges to handle a backlog of cases and expand from 20 days to 100 days the period during which migrant families may be held together while their asylum claims are processed. (Photo: (Chip Somodevilla / Staff/Getty Images)

The flow of migrants seeking asylum in the U.S. would be cut off before they cross the southern border illegally, under changes to immigration law proposed Wednesday by Sen. Lindsey Graham, R-S.C.

“There has been a 64% increase in people apprehended at the border, family units,” Graham, chairman of the Senate Judiciary Committee, said during a press conference about his new legislation.

Graham’s bill, according to his office, would close gaps in current law by requiring that those who apply for asylum from Guatemala, Honduras, El Salvador, and bordering countries file for asylum at refugee processing centers.

The processing centers would be located in the three so-called Northern Triangle countries or in Mexico, not in the United States.

The legislation also would add 500 new immigration judges to handle the backlog of illegal immigration cases and expand from 20 days to 100 days the period during which migrant families may be held together while their asylum claims are processed.

The bill also provides that unaccompanied minors from Central America would be processed in the same way as those who cross U.S. borders directly from Canada or Mexico, allowing officials to return them to their home country after screening rather than release them here.

Graham said such changes are needed to reform the immigration system, which he says is being gamed by those who enter the country illegally.

“One of the most important things I can stress to you is that people are trying to get caught, they’re not avoiding getting caught,” Graham said. “So when we talk about building a wall … that makes sense for illegal entry into the country, try to direct people into areas where we have a better chance of apprehending them. That doesn’t work when the goal of the person is to find a Border Patrol agent and turn yourself in.”

Graham said the solution isn’t to give more taxpayers’ money to countries whose citizens are crossing the U.S. border illegally.

“To those who want to give more money to Central America, it won’t stop the problem,” he said. “They are going to keep coming to the United States.”

U.S. officials caught nearly 100,000 migrants at the southern border in April, according to a press release from Graham’s office, and are on track to catch more than 1 million in fiscal year 2019, which ends Sept. 30.

Graham said his legislation is in the best interest of children,  who often are used by adults to cross the border into the U.S.

“It should go without saying, but travel from Central America to the United States is a dangerous and treacherous journey, particularly for children,” Graham said. “This legislation will help protect children by ensuring asylum claims are filed from their home area, not after a thousand-mile journey.”