She Survived an Abortion Attempt. Now, She Defends Life. 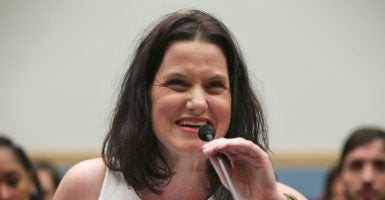 It was just last month that the House failed to pass a bill protecting babies who survive an abortion attempt. Our executive editor, Rob Bluey, was able to sit down with a woman who survived just that—an abortion attempt, something few can imagine. Gianna Jessen is now a pro-life activist, and today, we bring you her interview. Plus: The royal baby has arrived.

Gianna Jessen: Thank you for having me.

Bluey: You are the survivor of a failed abortion attempt. You’ve become a pro-life advocate. You have such a powerful story. I want to begin there. Tell us about when you first found out about this experience that you went through as a baby.

Jessen: I found out when I was 12. I’m adopted, and I found out on Christmas Day, which is interesting. My life has always been bizarre, but yes, I’m adopted, and my biological mother was 17 and she went to Planned Parenthood, who said, “You know, you’re too young to have a kid. You need to go have a late-term saline abortion.”

A saline abortion is a saline salt solution that’s injected into the mother’s womb. It burns, blinds, and suffocates the baby, and then the baby has to be born dead within 24 hours.

My enemies love to say this doesn’t occur anymore. In fact, it is rare, but they still do occur, and my response to that is, “Even if one more occurs, isn’t that one too many? I mean, you’re burning a child alive.” That’s pretty horrific.

And then they love to say that I’m lying because I have no burns on my body, but my medical records do, in fact, state, “Born during saline abortion,” which is pretty clear, “April the 6th, 1977, 6 a.m., 29.5 weeks gestation, 2.5 pounds, no resuscitation required upon arrival at the hospital,” which is miraculous.

So, I was speaking with a neonatologist in Italy, and he believes that the amniotic fluid was more than the saline solution and protected me, but he was careful to also say, ” … I believe it was Jesus,” and I absolutely agree with him. I am not ashamed of the gospel, and I have cerebral palsy as well. I was never supposed to hold up my head and all that, so, the fact that I’m able to walk is an absolute gift.

Bluey: Well, it is a blessing to have you here, and we’re so thankful for the work that you do. You did mention you have cerebral palsy … You’ve also described that as a gift, though, so I wanted to hear from you as to what it’s been like to live your life and why, when you found out at the age of 12, you decided to move in the direction of being an advocate for pro-life values?

Jessen: I think people need to know that their own life is precious. If you’re going to discard God in society and you’re going to be ashamed of Jesus, how are you going to teach people that they’re valuable at all? For me, it’s about telling you, “Hey, hey, you are valuable because you’re created in the image of God.”

She could have told me I was the devil himself and it wouldn’t have mattered because I’m not defined by her. I’m defined by Christ. So people want to say, “Leave Jesus out of this. You’re too Jesus-y.” You know, we’re too sophisticated for him now, right? We’re just too sophisticated.

And to more specifically answer your question, for me, it’s about sharing the gospel. And then if I do that, I know that people’s hearts will change and they will not end the lives of their children, and also to bring relief to women and families who are tormented by the decision to abort their children.

Where do you find peace, really? Does that make sense?

Bluey: It does, and … what is your message or how do you interact with other abortion survivors? Because there seems to be a growing number of you who are speaking out and talking about the value and sanctity of life.

Jessen: Yeah, … we just kind of do our thing. I don’t go to conventions and whatever of them, but we all obviously stand for life and are doing what we can.

Bluey: … We’re at a time when New York state has adopted a law. Virginia’s governor has spoken openly about infanticide. What do you think is wrong with the culture, and how can we move to a direction where we actually value life? What do we need to do?

Jessen: You know what I’m really tired of? I’m really tired of lip service. … I know there are some incredible pro-life people in Washington. I am so grateful for them and have been working for years. I get all that. But I also see that there are over 3,000 kids every day being killed in America and I don’t see people grieving.

I don’t see people showing up with the same passion, mixed with, or combined with, love that the proponents of abortion show up with. They’re not showing up with love, obviously. But they show up with so much passion and they are so driven, and if we showed up with that level of passion with love to end this, to stop this, to take care of the women, to take care of the babies, to adopt all the kids, it would end. But I don’t think we really care.

Bluey: Well, there is a move in the U.S. Congress to bring to the floor in the U.S. House—and despite that fact the Democrats are in control—the Born-Alive Abortion Survivors Protection Act.

Jessen: Yes, I was just there to support the—

Bluey: Heritage Action is obviously fully supportive of the discharge petition. It really requires Democrats to sign on in order for it to get a vote on the floor. Tell us about your activism and what you’re trying to do to change the way that that legislation moves forward and maybe change some minds along the way.

Jessen: Yeah, I was just in an office of a Democrat, and I was speaking to actually one of the staff members, and the guy was just stunned, just stunned. He couldn’t even hardly say a word. You could see that he had never thought about it.

So, when you’re sitting in front of someone who was supposed to be dead and is bearing the consequences of surviving an abortion, though I’m not a victim or a feminist—and I say that because I believe that the modern-day feminists, there are two requirements to be that. You have to hate men and you have to consider yourself a victim every day of someone, and I’m too empowered for that, so I want to make that clear.

Bluey: It does. I’d like you to talk about what that experience is like. So you walk into a Democratic member of Congress’ office. You talk to a staffer. How do you first approach that conversation? What is it like to explain your own story? And have you been able to win over their hearts and minds after you share your experience?

Jessen: Many times, yes. If I’m dealing with a man, I remind him that he’s made for honor and that he’s made to protect women and children, which you’re not supposed to say anymore.

I will never forget when I was in Australia, I walked into the member of Parliament’s office and I reminded him of that, and he began to tear up, and he said, “It has been 30 years since a woman has walked into my office and said these things to me and reminded me of these things.”

Bluey: Let’s talk about young people for a moment. We see so much enthusiasm—

Jessen: How do you know I’m not young? Huh?

Bluey: … When we have the March for Life, and not just in Washington, D.C., but now all over the country, I think the thing that moves people the most is the number of young people who are out there advocating—

Bluey: … for pro-life values. Why do you think that we’ve seen such enthusiasm among a younger generation, or even some millennials?

Jessen: Because they’ve dealt with their siblings who have died or their family members who have died, or they’re seeing the consequences of no one being home anymore.

We’re saying we can do whatever we want, we can live however we want, but there’s a consequence to each of those decisions, and they now are living those, and that changes you.

Bluey: It certainly does. … How can people find more about your story and the work that you’re doing?

Jessen: … I don’t do speakers bureaus and all that. Everything is through my website, giannajessen.com … and I’m on Facebook every day, writing away and doing my thing, but I am just all over, living this unconventional, beautiful life with my whole heart and soul and loving it.

Bluey: It is great to talk to you. Thank you for being with The Daily Signal.

Jessen: I have forgiven my biological mother for what she has done and have told her so, and I think this is very important for people to hear.

I am not a big shame festival. I am not about running around condemning people, but really telling them that the only person I have ever met to deliver them from the torture of having an abortion is Jesus.

Bluey: Thank you for sharing that with us.

Bluey: We appreciate it. It’s great to be with you.

Jessen: Have a good day.