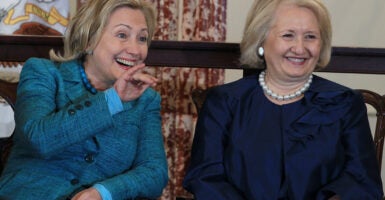 When Hillary Clinton was secretary of state from 2009 to 2013, she used the State Department's Office of Global Women's Issues to promote abortion. Pictured: Clinton (left) sits with Melanne Verveer, who headed the office at the time, on June 6, 2011, at the State Department. (Photo: Mark Wilson/Getty Images)

As the 116th Congress prepares to adjourn and policymakers look ahead to the 117th, among the policies up for discussion is the status of the Office of Global Women’s Issues (GWI) at the State Department.

President Barack Obama elevated the GWI office, raising its leadership to the rank of ambassador at large for Global Women’s Issues under then-Secretary of State Hillary Clinton.

Although the goal of advancing the well-being of women and girls is a worthy one, during the Obama administration and particularly under Clinton’s leadership, the GWI office was used to advance “sexual and reproductive health” under the umbrella of “gender equality.”

Those terms, while seemingly innocuous at face value, are often code for policies that neither empower women, nor protect their inherent human dignity; namely, the promotion of abortion.

As Obama’s second ambassador at large for Global Women’s Issues, Catherine Russell, stated when describing negotiations on the U.N. Sustainable Development Goals in 2015, the United States wanted to prioritize “access to sexual and reproductive health services as part of the health goal … [and] universal access to sexual and reproductive health and the promotion and protection of reproductive rights as part of the gender equality goal.”

Pro-abortion actors prove time and time again that given an inch, they’ll take a mile. Policymakers should be wary of future iterations of a GWI office that do not incorporate specific parameters to exclude these controversial issues from the scope of the initiative.

Clear, definitive guardrails are needed to prevent any future administration hostile to pro-life policies from misusing the GWI office to promote abortion under the guise of empowering women.

The Obama administration’s use of the GWI office to promote abortion overseas to the chagrin of pro-life governments in countries such as Kenya shouldn’t have come as a surprise. During previous attempts to codify the GWI office, pro-abortion lawmakers rejected attempts to include language that would have prohibited the promotion of abortion and incorporated the goals of fighting forced abortions and sterilization.

Under the current circumstances, concerns about including explicit pro-life protections in future congressionally authorized programs and initiatives go beyond the GWI office.

Never before has the Democratic Party demonstrated near-consensus in supporting the elimination of decades-old pro-life appropriation riders.

These riders are amendments to annual appropriations legislation that, among other things, prohibit the use of taxpayer dollars to pay for abortions abroad (the Helms Amendment), bar taxpayer dollars from being used to lobby for looser abortion laws in other countries (the Siljander Amendment), and allow the president to defund the United Nations Population Fund if it supports coercive family planning practices (the Kemp-Kasten Amendment).

Simply put, the recent open and aggressive calls to do away with long-standing pro-life foreign aid appropriations protections demonstrate just how much more necessary it is that policymakers are vigilant in outlining clear, concrete, and explicit prohibitions against the promotion or funding of abortion.

In the absence of such clarifying language for new programs and offices, pro-abortion actors can and will find justifications to promote abortion.

After all, the pro-abortion movement sees abortion as an “intersectional” issue that is connected to and inseparable from virtually every issue under the sun. To them, abortion is a human right and an absolute necessity for women to fully participate in every aspect of society.

Embedded in their understanding of terms like “workforce participation,” “comprehensive health care,” and “economic empowerment” is the belief that abortion is, in some way, a key component.

While the exact makeup of the next Congress remains an unsettled question, policymakers will face a pro-abortion House and the possibility of a Biden administration totally in lockstep with the abortion lobby (not to mention the most pro-abortion vice president in American history).

When Congress has an opportunity to negotiate legislation, it would be shortsighted to establish new international programs or offices without concrete protections against abortion promotion.

Protections for the unborn—and their mothers—are under direct threat like never before. Abortion does not empower women.

The U.S. government ought to promote policies that advance the well-being of women and girls at home and abroad, and pro-life policymakers need to be clear-eyed in working to achieve that end.