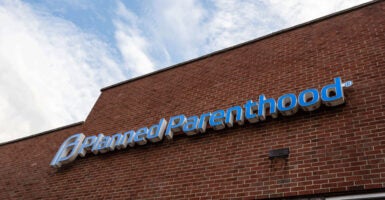 Voters in Kentucky will decide whether to approve a constitutional amendment to ensure that the state's abortion laws are insulated from legal challenges and to prevent tax dollars from being used to fund abortions. Pictured: A Planned Parenthood clinic as it appeared July 9 in Louisville, Kentucky. (Photo: Jon Cherry/Getty Images)

Having returned the issue of abortion “to the people and their elected representatives” in June with a watershed opinion in Dobbs v. Jackson Women’s Health Organization, the Supreme Court paved the way for a flurry of state-level activity regulating abortion.

Since the high court issued its Dobbs opinion, 13 states have fully outlawed abortion, and multiple legal challenges are pending against other states that seek to outlaw or restrict abortion to some degree.

Overall, post-Dobbs restrictions on the procedure have led to an estimated 6% decrease in the number of abortions across the nation. That number represents more than 10,000 unborn human beings whose lives have been saved.

With midterm elections concluding Tuesday, citizens have a chance to flex their recently restored constitutional muscles on the issue of abortion.

The state shall not deny or interfere with an individual’s reproductive freedom in their most intimate decisions, which includes their fundamental right to choose to have an abortion and their fundamental right to choose or refuse contraceptives. This section is intended to further the constitutional right to privacy guaranteed by Section 1, and the constitutional right to not be denied equal protection guaranteed by Section 7. Nothing herein narrows or limits the right to privacy or equal protection.

In Kentucky, midterm voters are considering a proposed amendment to the state constitution that would do precisely the opposite. It states: “Are you in favor of amending the Constitution of Kentucky by creating a new Section of the Constitution to be numbered Section 26A to state as follows: To protect human life, nothing in this Constitution shall be construed to secure or protect a right to abortion or require the funding of abortion?”

Voters’ approval of the constitutional amendment would ensure that Kentucky’s existing laws on abortion—namely the Human Life Protection Act, the Heartbeat Law, and other pro-life measures—are largely insulated from legal challenges under state law.

Approval of Kentucky’s amendment also would prevent citizens’ tax dollars from being used to fund abortions. It simultaneously would tie the hands of activist judges who otherwise might have used the existing terms of the Kentucky Constitution to “creatively” confer a right to abortion, regardless of any pro-life legislation passed by the Kentucky Legislature.

But what have Kentucky courts used as guiding principles when interpreting the commonwealth’s constitution?

The U.S. Supreme Court was bound by the terms of the U.S. Constitution in conjunction with the nation’s history and tradition on regulating abortion when faced with the question of whether to overturn Roe v. Wade, its 1973 decision legalizing abortion on demand. In the same way, the Kentucky Supreme Court in the past also has looked to the text of the commonwealth’s governing document and history on the issue.

Not long after the Supreme Court’s ruling in Roe v. Wade, and despite the high court’s creation of a “constitutional” right to abortion, the Kentucky General Assembly stuck to its guns in protecting unborn life. In 1982, its legislative findings included:

[I]t is in the interest of the people of the Commonwealth of Kentucky that every precaution be taken to insure the protection of every viable unborn child being aborted … and if … relevant judicial decisions are reversed or modified, the declared policy of this Commonwealth to recognize and to protect the lives of all human beings regardless of their degree of biological development shall be fully restored.

Later, in 2018, the Kentucky Supreme Court in Commonwealth v. Claycomb reiterated principles of constitutional construction when determining that a law called the Medical Review Panel Act was unconstitutional under Section 14 of the Kentucky Constitution. In writing for the majority, Chief Justice John Minton wrote:

The basic rule … is to interpret a constitutional provision according to what was said and not what might have been said; according to what was included and not what might have been included. Neither legislatures nor courts have the right to add to or take from the simple words and meaning of the Constitution … in interpreting Constitutions the words employed therein should be given the meaning and significance that they possessed at the time they were employed.

Most recently, in a 2019 case, Westerfield v. Ward, the Kentucky Supreme Court was faced with interpreting a proposed amendment to the commonwealth’s constitution that was slated for publication on the upcoming election ballot.

In determining that the proposed amendment was not constitutional in light of other provisions of the commonwealth’s constitution, Minton wrote: “When interpreting constitutional provisions, we look first and foremost to the express language of the provision, ‘and words must be given their plain and usual meaning.’”

Together, the effect of these principles of interpretation is clear: The express language of the commonwealth’s constitution confers no right to abortion. And Kentucky judges cannot read one into that constitution, no matter the abortion policy outcome they want.

Kentucky’s proposed constitutional amendment is an effort to avoid the commonwealth’s own version of Roe v. Wade. And, as the U.S. Supreme Court determined in Dobbs, to keep the power in the hands of the “people’s representatives” on a matter of significant importance.