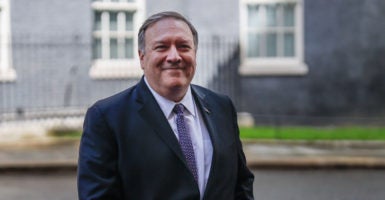 Speaking Wednesday in London at the Centre for Policy Studies—a distinguished think tank founded by Margaret Thatcher—Secretary of State Mike Pompeo delivered the annual Margaret Thatcher Lecture. And he said just what Britain needed to hear.

The essence of Pompeo’s remarks was that Britain is a great and global power, with which the United States enjoys a special relationship—and that it needs to remember that. Throughout, the secretary was careful not to fall into the trap of telling Britain what to do. Instead, he reminded it of its strengths, its interests, and its friends, and left Britain to draw the correct conclusions.

The special relationship is often ignored, or even derided. But as the secretary pointed out, it is a fact of history, of culture, of language, of shared security and intelligence cooperation, of tourism and travel, and of immense economic cooperation.

The fact that British diplomats “are free to enter our headquarters in Washington, D.C., wearing the very same [security] badges that we do” is symbolic of a much larger reality. Like an iceberg, much of the special relationship is below the surface—but it is there nonetheless.

The secretary did not make the mistake of avoiding hard subjects. The U.S. and Britain are similar in many things, but not identical, and as different nations it is natural they will differ from time to time. Mutual respect demands not soft platitudes, but the courteous and clear expression of differences.

One point on which we differ today is our approach to Huawei and other Chinese technology firms. Last month, Britain agreed to give Huawei a limited role in building parts of its 5G network.

The secretary reminded Britain of the dangers involved:

As a matter of Chinese law, the Chinese government can rightfully demand access to data flowing through Huawei and ZTE systems. Why would anyone grant such power to a regime that has already grossly violated cyberspace? What can her majesty’s government do to make sure sensitive technologies don’t become open doors for Beijing’s spymasters?

Pompeo’s point here was clear: The only thing Britain has to gain from dealing with Iran is trade, and there are better and more enduring ways of opening the Iranian market than trading with those who rule Iran today.

He also called on Britain to embrace the shale revolution that has grown U.S. oil production—“one American revolution that the British can actually welcome,” as he put it.

The best part of Pompeo’s speech came at the end. Recognizing that Britain’s decision on Brexit rests in its own hands alone, the secretary made it clear that “our relationship has been amazing and strong before Brexit, and it will be strong after it.”

But he also emphasized that the U.S. is eager “for a new free trade agreement that will take our No. 1 trade relationship to unlimited new heights. And I spoke with both Foreign Secretary Hunt and Prime Minister May about this this morning. We’ve filed all the papers we can at this point, and we are ready to go.”

Of course, as Pompeo will have known, the U.K. cannot do a trade deal with the U.S. unless and until it completely leaves the EU’s Customs Union. So the ball is in Britain’s court.

The U.S. has been as clear as it possibly could be. It has told Britain, in effect, to come on into the pool—the water outside the EU is fine. The U.S. has stated, over and over again in the plainest possible language, that it wants a major trade deal with the U.K.—and many of Britain’s friends around the world have said the same thing.

There is simply no basis for the notion that Britain will not be able to trade and prosper outside the EU. After all, the U.S. itself does both from outside the EU. So can Britain.

Congratulations to Pompeo for an excellent speech—one with several good jokes and good quotes—that managed the difficult feat of being both funny and serious. He spoke plainly and in friendship, and told Britain exactly what it needed to hear: We have our differences, but we also have your back.

What Britain needs above all is to believe what the U.S. already knows about it: Britain can thrive among its friends as an independent, democratic, and sovereign nation.