The Opportunities Brexit Gives Britain to Reshape Itself 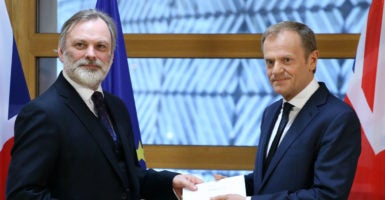 Today, British Prime Minister Theresa May formally notified the European Union that Britain will leave the union. This is a great day for believers in democratic self-government, here and around the world.

The process of Britain’s leaving the EU will not be easy, and today’s step—the triggering of the EU’s Article 50—is a vitally important stage in the process.

Article 50 is not saying Britain wants a divorce. It assumes the divorce exists, and starts a two-year period of negotiations about its terms.

So, unless all the participants in the negotiations agree to extend them, Britain will be out of the EU on March 29, 2019. That part is simple enough. The rest of the story is tougher.

First, there are the domestic issues.

The British government will have more votes to win in Parliament, and will likely face new legal challenges, as it starts the legislative process for taking back powers and administrative responsibilities from the EU.

The Scottish National Party has also demanded a second referendum on Scottish independence, a demand that May has rejected.

Second, there are the negotiations with the EU.

These range from visible trade, to invisibles (things like banking and insurance, where Britain has important interests), to migration and the rights of EU citizens in Britain (and British subjects living in the EU), to Britain’s contributions to the EU’s budget and other projects.

These negotiations will also extend to the many subsidiary agreements, such as the one governing airline flights in Europe.

Third, there is Britain’s desire (and need) to to take advantage of its newfound freedom and to start negotiating trade deals with other nations. A U.S.-U.K. trade deal is centrally important, but Britain is also exploring deals with well over 30 other nations.

Fourth, and finally, there is the need not just to take back powers from the EU, but to look carefully at all of them and to remake the British regulatory and administrative state.

That is in itself an immense challenge, but it also offers an immense opportunity.

Since Britain entered the EU in 1973—then known as the European Economic Community—the EU has crept into every corner of British life. Pulling it out creates the opportunity, and the need, for a rethink.

Most nations don’t get a chance to do a rethink on this scale unless they lose a major war. Britain is getting that chance by recovering its democracy. This is a unique event in history.

None of this is going to be easy. But no one said governing yourself is supposed to be easy. It just happens to be the right thing to do.

Even though the May government is careful and competent, I don’t doubt that Britain will make mistakes going forward. But they will be British mistakes, and they can be and will be corrected by the British people, through British institutions.

On the other hand, the EU’s mistakes—like creating the euro, or deciding to admit millions of Syrian refugees—are nearly immune from correction by the people, because the EU was designed from the beginning to be about giving power to the elite and keeping it out of the hands of the people.

On June 23, 2016, the British people rejected that course. They did not choose a new course. They chose an old course—the course they have followed for hundreds of years, of governing themselves.

That is not a course of hostility to their neighbors, to institutions like NATO, or to the world. It is a course that proclaims that free peoples must cooperate freely.

Today, the British government has shown that it respects the will of the people, and has begun the process of formal separation from the European Union. That process will be challenging. There will be ups and downs. But there will be no retreat.

Britain has made a choice all Americans can understand, and must respect. It has chosen freedom.