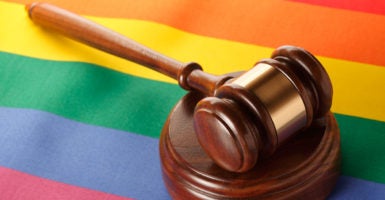 According to the British Columbia Human Rights Tribunal, the price tag for agreeing with the Bible—and biology—on gender rather than the transgender agenda is a whopping 55,000 Canadian dollars. (Photo: DNY59/Getty Images)

There’s no such thing as “free” speech in Canada. If Christians want to express themselves, it’ll cost them. And the going rate isn’t cheap. According to the British Columbia Human Rights Tribunal, the price tag for agreeing with the Bible—and biology—on gender is a whopping 55,000 Canadian dollars.

Bill Whatcott’s crime wasn’t being a Christian. It was refusing to hide it. When a biological man ran as a woman in a Vancouver-False Creek election, Whatcott started a campaign to expose the transgender agenda. Leading up to the vote, he printed 1,500 flyers about the harms of Morgane Oger’s lifestyle, complete with Scripture references and pictures. Although it wasn’t necessarily artful, it wasn’t legitimately “hateful” either.

Oger disagreed, filing a complaint that his human rights had been violated. Whatcott countered, insisting that what he wrote “was an act of religious expression.”

As he told his supporters on Facebook, “I am on trial today for properly gendering an NDP political candidate who thinks he’s a woman but was indeed born a biological male.” He said he sees it as his “duty” to “stand for the truth, to stand against coercion and trying to force us to use the pronouns that are fake, to call men ‘women,’ and to call women ‘men.'”

The three-person tribunal ultimately sided with Oger, ordering Whatcott to fork over $35,000 in compensation to Oger, along with a $20,000 fine for “improper conduct” during the proceedings.

John Carpay, president of the Justice Center for Constitutional Freedom, defended Whatcott by arguing that, “The Supreme Court of Canada has long held that freedom of expression is the lifeblood of democracy.” But not when it crosses the lines of transgender activism, The Stream’s Michael Brown points out from America. “Freedom halts there.”

If you think this kind of punishment is far-fetched here at home, think again. In December, a Virginia high school teacher was fired over a pronoun. Universities are rewriting their language rules, father-daughter dances are being cancelled, and student senators are losing their political backing—all because the extreme Left agrees with Canada that there should be no freedom when it comes to the LGBT agenda.

The House’s liberal majority is so convinced that it wants to nationalize sentences like Whatcott’s. Under the Democrats’ Equality Act, we might as well take a match to the First Amendment, because conservative opinions won’t just be frowned on—they’ll be punished. That goes for education, small and big business, sports, charities, privacy, and so much more.

Whatcott’s case is horrifying, but it’s exactly where America is headed if we continue down this path.