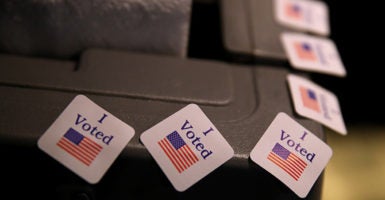 In a tale of two city mayors arrested last week on voter fraud charges, one resigned while the other says a jury will decide.

Edinburg, Texas, Mayor Richard Molina doesn’t plan to go anywhere. Molina won the mayor’s race in November 2017 by 1,240 votes. But on April 25, Texas Rangers arrested the mayor and his wife, Dalia, alleging the couple ran a voter fraud scheme to put him in office.

After about a week of silence, the mayor said Thursday the charges won’t affect his job, and asked Edinburg residents to respect his constitutional rights to due process.

“We respectfully deny any criminal wrongdoing and look forward to defending ourselves in the proper venue. That is a courtroom,” Molina said in the video statement. “These charges will not affect my ability to perform the people’s work as your mayor. I only ask that you respect our constitutional right to a fair trial and due process.”

Prosecutors allege the Edinburg mayor and his wife had numerous voters change their address to places they didn’t live, including an apartment complex the mayor owns, so they could vote for him in the Nov. 7, 2017, race. Those who moved included paid campaign workers.

Francesco Caramagna, the mayor of Elmwood Park, New Jersey, isn’t putting up as much of a fight, as he reportedly resigned from office on April 29 amid charges of interfering in the secrecy of the election process.

Like Molina, Caramagna was elected in November 2017. He is scheduled to appear in court May 22, according to NBC 4 in New York. His lawyer, John Bruno Jr., said Caramagna “has stepped up to the plate” and “looks forward to clearing the matter up in the courtroom.”

In Oregon, 10 people were convicted of voter fraud stemming from the 2016 election, The Oregonian newspaper reported. The arrests came after the Oregon secretary of state’s office, which oversees elections, forwarded evidence to the state’s Justice Department that 56 people engaged in fraud.

The newspaper reported that four Democrats, one Republican, one Libertarian, and four others not affiliated with a political party were convicted.

Most cases involved people voting in two different locations—in some cases, two separate states. None of the cases resulted in jail time, and the maximum penalty was $1,000.

While the other two states have a degree of closure, the Texas case appears likely to continue, even as some of the city’s residents reportedly call for the mayor to resign.

“This is just more evidence that voter fraud is out there, and people will cheat and take advantage of circumstances to win,” Han von Spakovsky, manager of the election law initiative at The Heritage Foundation, told The Daily Signal.

A total of 1,199 proven cases of voter fraud, and 1,037 convictions, are listed in a database compiled by The Heritage Foundation.

In the Texas case, Molina defeated incumbent Mayor Richard Garcia in a three-candidate nonpartisan race in Edinburg, a city with a population of more than 90,000 located near the Mexican border. About 8,400 votes were cast in the election, and Molina carried 54% of the vote, according to local media reports.

The city is headquarters to U.S. Customs and Border Protection operations in the Rio Grande Valley.

Texas media outlets reported the couple turned themselves in April 25 and were charged with organized election fraud and illegal voting. They were arraigned and posted bond the same day.

“My office is appreciative of the many witnesses who have come forward and cooperated with the investigation, explaining how they were lured by an ambitious candidate into participating in an illegal voting scheme to elect Richard Molina,” Hidalgo County District Attorney Ricardo Rodriguez said in a statement.

“We encourage any additional witnesses who were pressured to engage in fraudulent voting in Molina’s election to step forward and cooperate with authorities,” Rodriguez added. “We’re prepared to present a full array of charges against Molina and his co-conspirators to the grand jury for a thorough evaluation of the evidence to ensure justice is served.”

“It’s time today to let this process really happen,” Zayas added. “He maintains his innocence. … As far as the city goes, this has nothing to do with our day-to-day operations. … The city is supportive of the mayor, and he’s innocent.”

Garcia, the former mayor, on Facebook wrote that he was “saddened that our community receives this black eye.”

“In spite of many immediate and obvious discrepancies at the time of the election, I did not contest the outcome,” he said in the post. “I believe in our democracy with every fiber of my being. This is why a day like today is not a victory for anyone. It is an assault on the very democracy and the democratic process that we hold so dear to our hearts and for which so many of us and our loved ones have fought to conserve.”

He said Molina was once seen as “the Valley’s rising star, filled with promise and integrity.”

“I am also saddened for the families and followers of the Molina family,” Garcia added. “One should never celebrate the woes of others.”

The arrest is, in fact, only the latest chapter in an ongoing investigation of Molina’s election. Since last year, 18 individuals have been arrested in connection with the alleged illegal voting scheme.

The Texas Department of Public Safety and Texas Rangers assisted local police in the probe.

“Voter fraud is an affront to democracy and places the decision-making authority of the Texas electorate in the hands of those who have no right to make those choices,” Texas Attorney General Ken Paxton said in a statement.

“Voter apathy is caused by rigged elections with guaranteed outcomes,” Paxton added. “My office will always do everything it can to protect the integrity of Texas elections and the rights of every legal voter to cast a ballot and have it counted accurately. No one is above the law.”

Republican state legislators across the country have pushed for voter ID laws to make voter fraud more difficult. Democratic lawmakers argue that such laws amount to voter suppression. Many Democrats have even argued voter fraud doesn’t exist, or if it does, it’s negligible.

J. Christian Adams, a former Justice Department lawyer who is now the president of the Public Interest Legal Foundation, an election watchdog group, praised the action by Texas law enforcement.