What a Registration Surprise in Texas Tells Us About Voter Fraud 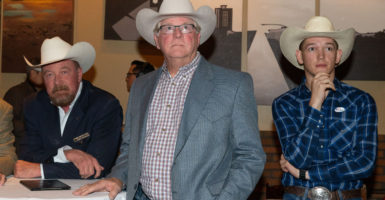 The man in charge of elections in Texas made a surprise announcement last week: As many as 95,000 noncitizens had registered to vote, and 58,000 of them may have voted in at least one election between 1996 and 2018.

The finding announced by Texas Secretary of State David Whitley is serious, and almost immediately the news became the subject of sensational statements.

Some, such as President Donald Trump, assert that this constitutes proof that 58,000 individuals unlawfully voted in Texas. Activists on the left, meanwhile, dismiss the findings altogether as merely setting the stage for voter purges and disenfranchisement.

In this case, neither side is getting it right.

Here’s what is actually happening. In Texas, individuals—including noncitizens—are required to present documents establishing their residency and identity when obtaining a driver’s license or state-issued personal identification card.

When a person presents a valid document such as a green card, indicating he or she is lawfully present but not a U.S. citizen, that record is preserved by the Texas Department of Public Safety.

This sort of information can be quite useful for elections officials responsible for maintaining voter rolls. Simply put, the records offer a more reliable reference set than self-reported data, since they are derived from verified government documentation.

For nearly a year, Whitley’s office has worked to compare the state’s voter rolls to data from the Department of Public Safety, with the goal of flagging people who are registered to vote but who also provided DPS with documentation indicating they are not U.S. citizens.

Comparing driver’s license information with voting records makes sense given that, according to the U.S. Election Assistance Commission, “the most common source of registration applications during the 2016 election cycle” was from motor vehicle agencies.

Texas officials sought to leverage this data to “flag” individuals who may have improperly registered to vote by cross-referencing DPS records of noncitizens and voter registration to look for matches. According to an official state advisory, Texas used “some of the strongest possible matching criteria,” such as a voter’s full name and full Social Security number, to “produce actionable information for voter registrars while producing the least possible impact on eligible voters.”

Nevertheless, Whitley’s office cautioned that the matches should be further investigated, and do not automatically trigger cancellation of voter registration.

The next step is for county election officials to investigate particular instances of possible unlawful registration and contact flagged voters by mail. These individuals then would have 30 days to respond to the letter in one of three manners.

A voter may reply that he or she is not a U.S. citizen, or may not reply at all.  Either will result in the voter’s being removed from state rolls.

The voter also may respond with copies of a birth certificate, passport, or certificate of naturalization, thus affirming his or her right to vote.

Whitley’s announcement means that Texas has found 95,000 probable unlawful voter registrations, but these matches are not yet confirmed cases of voter fraud, nor the trigger for automatic cancelling any voter’s registration. And at no point is any lawful voter in danger of losing the right to vote.

Maintaining voter rolls is critical to a healthy and secure electoral system. In 2012, the Pew Center on the States reported that America’s voter rolls are riddled with errors.

Pew reported that 24 million registrations, nearly 1 in 8, are inaccurate, out-of-date, or duplicative; 2.8 million individuals are registered in two or more states; and nearly 2 million deceased individuals remained on the rolls.

Also in 2012, Florida officials discovered that around 53,000 voters on the state’s rolls were in fact deceased. Earlier this year, Los Angeles County agreed to clean up its voter rolls, with the potential to remove 1.5 million inactive voters.

Errors on such a scale raise serious doubts about the ability of elections officials to say with certainty who is, and who is not, lawfully permitted to cast ballots in an election.

In Texas, for example, Attorney General Ken Paxton reported in a 2018 letter to the Senate Select Committee on Election Security that counties often fail to remove from the rolls individuals who self-report as noncitizens when responding under oath to a jury summons.

In Virginia, the Public Interest Legal Foundation discovered that the state had removed 5,556 noncitizens from the rolls since 2011—but had done so only after the voters themselves indicated they were not citizens. In other words, the state had taken no proactive steps to detect them.

Allowing these unauthorized registrations to persist makes it possible for ineligible individuals to vote—a felony under federal law. Each illegal ballot cast effectively disenfranchises a lawful voter, to say nothing of the broader doubts that unlawful voting raises about the sanctity of the process and the validity of the results.

That problem is hardly unique to Texas, a fact to which the many entries in The Heritage Foundation’s the voter fraud database can attest.

Now it is up to county officials in Texas to carry the ball forward. Texas law gives them discretion on the crucial question of whether to investigate the voters the state has flagged.

It is incumbent on these officials to follow up on the leads and remove every illegal registration—especially now that understandable doubts have been raised in the minds of Lone Star voters.

Those individuals who knowingly voted despite being ineligible ought to be prosecuted.

Other states should follow the example set by Texas, and take seriously the task of cleaning up their voter rolls and maintaining them better. American voters in every state deserve nothing less.