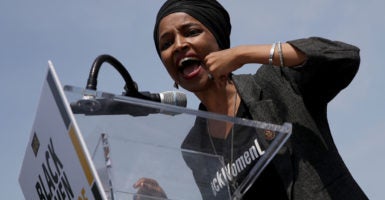 Rep. Ilhan Omar, D-Minn., speaks Tuesday at an event outside the Capitol calling for the censure of President Donald Trump for "inciting violence against" Omar. (Photo: Win McNamee/Getty Images)

Have you ever watched that inspiring speech at the 1984 Republican National Convention by Jeanne Kirkpatrick, the great conservative scholar and ambassador to the United Nations?

The one where she defended President Ronald Reagan’s actions to save the Caribbean island nation of Grenada from terror and totalitarianism?

As she said prophetically, they always “blame America first.”

The villains haven’t changed, just the location of the crime.  A little further south of Grenada, in Venezuela, where courageous young freedom fighters such as interim President Juan Guaido are being undermined by the same old “Blame America First” crowd.

As they seek to support the Cuban- and Russian-backed criminal dictatorship of Nicolas Maduro, the Blame America First crowd is committing sins of omission and commission.

For example, stalwart socialists such as Sen. Bernie Sanders, I-Vt., and Rep. Alexandra Ocasio-Cortez, D-N.Y., always quick to criticize America’s free enterprise system, have omitted any reference to the devastating consequences of socialism that the world is watching in Venezuela in real time.

More demoralizing to the millions of desperate Venezuelan victims of the tyranny of Hugo Chavez’s “socialism for the 21st century” have been the sins of commission.

As they fight bravely in the streets in Caracas and throughout Venezuela, about 50 pro-Maduro radical leftists from groups such as Code Pink and the ANSWER coalition have occupied—not Wall Street this time—but Venezuela’s embassy in Washington.

And as Fox News reports, Rep. Ilhan Omar, D-Minn.,  a member of the House Foreign Affairs Committee, refused Wednesday to place the blame for the catastrophe in Venezuela squarely where it belongs—on 20 years of Chavismo. That’s the left-wing ideology based on Chavez’s views and programs.

Instead, you guessed it, Omar blames U.S. policies for “the devastation in Venezuela.”

Omar is wrong. The terrible suffering in Venezuela has been documented by The Heritage Foundation’s annual Index of Economic Freedom.

And as it has been for more than a decade, again in the 2019 index Venezuela is at the very bottom of the rankings—in the “repressed” category.  The only country in the world with less economic freedom today is North Korea.

Let’s hope the Venezuelan people—and Washington policymakers—are not discouraged by the Blame America First crowd.  Let’s hope they persevere, in the spirit of Reagan and Kirkpatrick, until the battle to restore freedom and democracy in Venezuela is won.