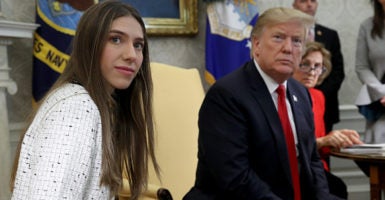 The wife of the interim president of Venezuela, visiting the White House on Wednesday, said her country is engaged in a life-and-death struggle against an embattled dictatorship.

“We’re fighting for life and death, and we know that what will triumph in the end is life,” said Fabiana Rosales, whose husband, Juan Guaido, is recognized as the leader of Venezuela by the United States and more than 50 countries around the world.

Still, Venezuelan dictator Nicolas Maduro has control of parts of the military and is trying to cling to power, with the backing of Russia, China, and Cuba.

President Donald Trump welcomed Rosales to the Oval Office and talked about the ordeal the Venezuelan people are experiencing.

“Venezuela was and is still a country with tremendous potential, where people are starving,” Trump said. “They’re getting killed. They’re being beaten. What’s going on there is unfathomable. …  We’re very much in contact with your husband and everybody else, and a lot of things are happening.”

The Venezuelan first lady said the movement for a free, legitimate government in the South American nation is facing hardships, but those hardships are propelling it forward.

She recounted recent actions carried out by Maduro’s loyalists.

“I fear for my husband’s life. Yesterday, his life was attacked. Also, his chief of staff, Roberto Marrero, was kidnapped in a very violent and vile manner. Not only is he his chief of staff, he is a personal friend,” the Venezuelan first lady said.

“Yesterday, also, they detained his mother’s cousin. He was accused of terrorism. And Gustavo Guaido, his brother, was also accused. They are hitting everything that is closest to him, trying in that way to destabilize him,” she said.

Romy Marrero, the chief of staff’s wife, who accompanied the Venezuelan first lady to the White House, described how men raided their home at 2 a.m.

“They destroyed our house, our child’s room. Everything. They planted guns and things,” she said. “This happened for three hours. It was a nightmare, and after that, they kidnapped him. …  We are afraid for his life. We have no communication. We have a 7-year-old kid who doesn’t know anything.”

When a reporter asked the president whether the U.S. would ramp up pressure on the Maduro regime, Trump responded: