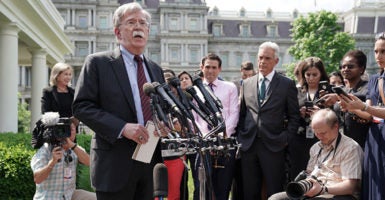 John Bolton, the president's national security adviser, speaks about Venezuela with reporters Tuesday outside the White House. Bolton called for a peaceful transition from political turmoil to a government controlled by an interim president. (Photo: Chip Somodevilla/Getty Images)

Juan Guaido, Venezuela’s lawful leader under its Constitution, was set to lead a march against Nicolas Maduro, who continued to cling to the South American nation’s presidency with the support of Russia, China, and Cuba.

The U.S. is among more than 50 countries around the world backing Guaido as Venezuela’s only legitimate leader.

After military officials warned Guaido of his pending arrest, he moved up the demonstration and called for the military to turn against Maduro, whose socialist regime has plunged the nation into corruption and poverty.

President Donald Trump’s national security adviser, John Bolton, told reporters Tuesday that “everything is on the table” from the U.S. perspective if the Maduro regime uses military force against civilian protesters.

“If this effort fails, they will sink into a dictatorship from which there are very few possible alternatives,” Bolton said outside the White House.

Bolton added that Venezuela’s defense minister, chief justice, and commander of the presidential guard already publicly backed Guaido as interim president and must step up now.

“They committed to support ousting Maduro,” Bolton said. “It’s time for them now, if the Cubans will let them do it, to fulfill the commitments. It’s time for the rest of the military to show what their own families believe ought to happen, and that is Maduro needs to go.”

Bolton said the Trump administration has planned for some time for the “day after” the Maduro regime collapses, and believes the events Tuesday could be a tipping point:

From the perspective of a humanitarian crisis we face in Venezuela, I hope this is enough to tip Maduro out of power because it’s only when he and his fellow kleptocrats who have plundered the Venezuelan economy for the last 20 years are removed from power that we can put the Venezuelan economy back on its feet for the people. The sooner Maduro is gone, the sooner is the possibility of justice and real economic growth for the Venezuelan people.

Vice President Mike Pence also spoke about the crisis in Venezuela during remarks aboard the USS Harry Truman in Norfolk, Virginia.

“As we stand here today aboard this ship, the people of Venezuela are seeking to reclaim freedom and democracy in their nation—a nation impoverished by dictatorship, socialism, and oppression,” Pence said, adding:

Maduro began what he saw as his second term in January after a disputed election fraught with allegations of fraud.

The Venezuelan National Assembly invoked Article 233 of the country’s Constitution to declare Maduro illegitimate, and Guaido, as head of the elected assembly, stood up to fill the void.

Early Tuesday, Guaido told the crowds in Venezuela: “The moment is now.”

“The armed forces have taken the right decision,” Guaido said. “With the support of the Venezuelan people and the backing of our Constitution, they are on the right side of history.”

Maduro said the military has “total loyalty to the people, to the Constitution, and to the fatherland.”

Top military figures, however, are publicly siding with Guaido. In the streets, the military and law enforcement began marching with protesters instead of arresting them, said Ana Quintana, senior policy analyst for Latin America and the Western Hemisphere at The Heritage Foundation.

Government officials who once detained anti-Maduro activist Leopoldo Lopez released him, which is one of the biggest stories going unnoticed, Quintana said.

“More military is defecting during the march toward the presidential palace,” Quintana told The Daily Signal.

Quintana said the situation could change by the minute and Maduro’s ouster is not inevitable.

“It’s absolutely unsustainable, but Russia could deploy more military assets,” she said. “Regime change is dangerous for Cuba, which has 10% to 12% of its GDP tied to Venezuela. The Castro regime survived because of its reliance on first the Soviet Union, and later on [Hugo] Chavez and Maduro.”