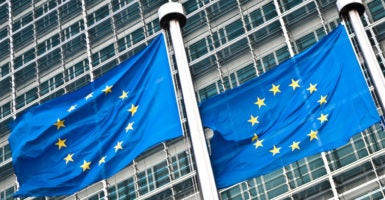 Today, Europe is in flux. The implications of populism, political fragmentation, and the upending of traditional political paradigms in many countries are not yet fully understood. (Photo: Bosca78/Getty Images)

In about six weeks, from May 23 to 26, European Parliament elections will take place across Europe. Those elections could be a defining moment.

The most recent prior EU Parliament elections took place in May 2014. Just a few months before, the borders of a European country were changed by force. Russia invaded Ukraine, annexed Crimea, and since then, has poured military capabilities into the annexed territory.

Russian forces continue to perpetuate a war in eastern Ukraine that has cost 13,000 lives, including those of more than 3,000 civilians.

Also in the past five years, China has continued its emergence as a formidable diplomatic, economic, military, and political power.

European capitals are only beginning to formulate responses to Chinese strategic investments in Europe, as well as to the risks involved with Chinese companies providing important technological systems on the Continent.

Yet perhaps the most impactful change since the prior European election has been the effects of political instability in North Africa and the Middle East. The migrant crisis and its continued aftershocks have shaped European politics in profound ways.

Today, Europe is in flux. The implications of populism, political fragmentation, and the upending of traditional political paradigms in many countries are not yet fully understood.

The Heritage Foundation recently hosted an event examining the likely implications of EU elections for transatlantic relations and for the future of Europe.

One big question is whether Europe is going to go on experimenting with defense policy, primarily: Considering which way is best to protect Europe, either with a smaller U.S. component or with deeper integration within the transatlantic community. If I want to exaggerate this dilemma in black-and-white terms, the tendency is alone or together.

Defense is not the only policy arena that could see an impact from EU’s elections.

The makeup of the next European Parliament will determine questions about the EU’s common budget and those relating to the EU’s customs union. More generally, voters will have an opportunity to express their views on the future of Europe, the relation of European nation states, and the EU bureaucracy in Brussels.

Currently, two main blocs that represent the majority of establishment parties in Europe control 54% of seats in Parliament.

Current polling suggests both the European People’s Party and Socialists & Democrats blocs are set to lose a significant number of seats. Parties expected to gain seats include euroskeptic parties, including those in the conservative European Conservatives and Reformists group, which includes parties such as the U.K. Conservative Party, Danish People’s Party, and Poland’s Law and Justice Party.

The Heritage Foundation will be closely tracking the results of May’s European Parliament elections. Between now and May 23, we will publish a series of editorials from U.S. and European scholars examining the upcoming elections and their broader implications for Europe moving forward—and for the future of the transatlantic relationship.