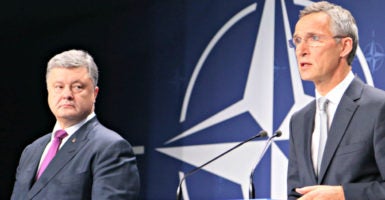 KYIV, Ukraine—The final two contenders are getting ready to rumble.

In a March 31 election, voters narrowed the field of Ukraine’s presidential contenders from 37 candidates to two.

In one corner, comedian and political dark horse Volodymyr Zelensky. In the other, incumbent President Petro Poroshenko.

The first round went to Zelensky, who rolled up about 30% of the vote. Poroshenko took second place, claiming roughly 16%.

Since no candidate won a majority, the election for Ukraine’s presidency moves to a second-round runoff April 21.

The final three weeks of campaigning were bound to be intense and spirited. Even so, the extent of last week’s political peacocking caught many off guard.

In a video released Wednesday on Facebook (complete with an electric guitar riff rocking in the background) Zelensky struts onto the turf of Kyiv’s 70,500-seat Olympiyskiy stadium.

Looking into the camera as he walks—with a few slow-motion cutaways for effect—Zelensky challenges Poroshenko to a one-on-one prime-time debate in the soccer arena. The front-running challenger also calls for a drug and alcohol test prior to the contest.

Zelensky then gives Poroshenko 24 hours to accept the challenge.

In the wee hours of Thursday morning, Poroshenko released his own video, agreeing to the debate.

Poroshenko’s video retort is subdued by comparison, although some orchestral music plays in the background. The incumbent president wears a suit without a tie and stands in one still-frame, nighttime shot for several minutes with Ukraine’s presidential administration building as backdrop.

Poroshenko mostly steers away from personal taunts in the video and underscores his own accomplishments. Looking forward, he says Ukraine needs a steady hand in the country’s top office to stay the course with anti-corruption reforms and by deepening the country’s Euro-Atlantic partnerships.

Both candidates had submitted blood tests by Friday for analysis. Neither tested positive for illicit substances, Ukrainian media outlets reported.

The Ministry of Internal Affairs of Ukraine announced Thursday that it was prepared to provide security for the stadium debate.

There’s Poroshenko—who made a fortune with his chocolate company and other businesses, and rose to power in Ukraine’s freewheeling post-Soviet years.

And then there’s Zelensky—a political newcomer and TV producer whose fame is based largely on playing the role of Ukrainian president in a popular TV comedy show.

“A Zelensky presidency would be not only a political but also a historical aberration in post-Soviet Ukraine,” said Andreas Umland, senior nonresident fellow at the Institute of International Relations in Prague.

“The obvious explanation for Zelensky’s advance is the deep disappointment of Ukrainians with their governing class,” Umland said.

For his part, Zelensky has shied away from substantive media interviews. However, his political positions are clear: He wants to shake things up in Kyiv to get rid of corruption, and he pledges a hard line against Moscow.

The front-runner’s campaign released an anti-corruption plan over the weekend, proposing to abolish parliamentary immunity, digitize more of the government’s bureaucracy, rein in the power of law enforcement agencies, and increase punishments for corrupt government officials.

The plan also suggested that Western law enforcement agencies would be used to help prosecute Ukrainian officials in corruption cases.

“We emphasize there is no need to reinvent the wheel in this area. It has long been known what should be done,” the Zelensky campaign wrote on its channel on Telegram, a popular instant messenger service, adding that “there has never been the political will” to pursue such an aggressive anti-corruption program.

Despite his stated anti-corruption convictions, Zelensky’s political inexperience has some Western leaders and political experts concerned. With an ongoing war and the economy in trouble, Zelensky won’t have much time or room for error in learning the ropes once in office, Umland said.

“In peaceful times and under stable conditions, Zelensky’s assumption of power would, perhaps, be an experiment worth trying,” Umland said.

“Yet, as Ukraine’s current geopolitical situation is extremely complicated, the Zelensky presidency is a chancy development,” Umland said. “In times of war, Ukraine does not have the luxury of political experimentation and governmental dilettantism at the top.”

However, Zelensky’s supporters say his nebulous policy positions and inexperience ultimately could benefit the country.

“People just believe that with him in office, the government will create far less obstacles and problems. In fact, the weaker the leader, the better for ordinary people,” Druzenko said.

In the weeks following Ukraine’s pro-European revolution in 2014, Russia invaded and seized the nation’s Crimean Peninsula. That April, Russian forces engineered a war in Ukraine’s eastern Donbas region. Within months, the Kremlin had deployed thousands of its soldiers to the conflict.

After more than five years of constant combat, the ongoing war is frozen along a static, 250-mile-long front line. So far, the conflict has killed more than 13,000 Ukrainians. And with 1.7 million people who fled their homes due to the violence, Europe’s only ongoing land war is also the Continent’s biggest humanitarian crisis.

The war also has been a body blow to Ukraine’s economy.

The country’s gross domestic product topped out at $183 billion in 2013—the year before the revolution and war. By 2015, it had dropped by about half that number. At the same time, the national currency plummeted in value and inflation correspondingly spiked.

Voters elected Poroshenko as president in May 2014. After almost five years in office, Ukraine’s GDP is on the rebound, topping $126 billion in 2018. Still, many Ukrainians haven’t felt the impact of the turnaround and remain worried about the economy.

A poll in March by the International Republican Institute, a U.S. think tank, found that inflation was the top personal concern for Ukrainian voters by a wide margin—62% said it was their No. 1 issue, while 20% named the war.

When it comes to issues most important for the country at large, Ukrainians singled out the war and corruption as their top two concerns.

Umland said Russia’s military campaign was to blame for most of Ukraine’s post-2014 economic downturn. However, he said Poroshenko was still taking the lion’s share of the blame for a bad economy.

“At least in the Ukrainian population’s perception, the slow recovery from the shock of 2014 and many other continuing problems are largely due to Poroshenko and company’s various failures as reformers … rather than only results of Kremlin meddling,” Umland said.

Too Slow, Too Steady

Yet life remains tough for many Ukrainians. There’s a war on, for one, and their country remains the second-poorest in Europe, behind Moldova.

Amid that discontent, Zelensky has tapped into a widespread desire for new faces in government among Ukrainians who are frustrated with the current pace of progress.

“The Zelensky phenomenon is not pro-Zelensky or even anti-Poroshenko, but anti all of the Ukrainian politicians who have led Ukraine until now,” Taras Kuzio, a political science professor at the National University of Kyiv-Mohyla Academy, wrote in a recent Facebook post.

Frustration with the slow pace of change in Ukraine may have led to Zelensky’s anti-establishment appeal, Kurt Volker, U.S. special envoy to Ukraine and former ambassador to NATO, told “PBS NewsHour” in a Thursday interview.

Striking a note of support for Poroshenko, Volker summarized Ukrainians’ choice at the ballot box April 21.

Some experts say another factor potentially is at play, too. Zelensky’s charismatic, media-savvy campaign is a novelty in Ukrainian presidential politics.

“Other outsiders have advanced into Ukraine’s parliament and to high ministerial posts before,” Umland said. “Yet never has a total political novice come as close to occupying Ukraine’s highest public office as Zelensky.”

Druzenko, the former Ukrainian government official, attributed much of Zelensky’s success to his use of social media, along with an effective messaging strategy that understood the national mood.

“[Zelensky’s] campaign was innovative, creative, and allowed everybody to construct its own image of Zelensky,” Druzenko told The Daily Signal. “His popularity is drawn by the thirst for changes.”

In another video Thursday, Zelensky suggests that the moderator of the Olympiyskiy stadium debate should be Yulia Tymoshenko, Ukraine’s former prime minister, who came in third behind Poroshenko in the March 31 election.

“In order to avoid bribery, provocations, and administrative pressure, we propose to appoint an independent debate moderator,” Zelensky says in the video, asking for Tymoshenko’s participation.

Tymoshenko subsequently turned down the offer, and Poroshenko jabbed back by video Friday.

“Throughout my life, I have repeatedly faced challenges, not only from political opponents, but from strong adversaries,” the Ukrainian president says. “I looked into their eyes and didn’t look away. I didn’t look for reasons, put forward conditions, or hide behind anyone’s back. That’s ugly. Be a man. Come to the debate. If it’s the stadium, let it be the stadium.”

Poroshenko said Sunday that he wanted to schedule the soccer stadium debate for April 14. Zelensky replied Monday in a new video, saying he wants the debate to be held April 19.

As of this article’s publication, Poroshenko had not replied.