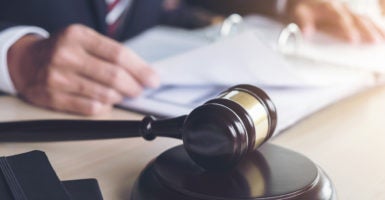 If passed, the FAIR Act would rebalance a system that has become skewed against innocent property owners in every meaningful way. (Photo: Pattanaphong Khuankaew/EyeEm/Getty Images)

Lawmakers in the House of Representatives reintroduced sweeping bipartisan legislation to rein in and reform the nation’s abuse-prone civil forfeiture laws on Wednesday.

It was not always so.

Civil forfeiture is the law enforcement tool that allows property or currency to be seized and permanently forfeited, even in situations where the owner is neither charged with nor convicted of a crime.

Prior to the 1980s, civil forfeiture was a niche law enforcement tool relegated chiefly to admiralty and customs law. But Congress, followed later by nearly every state, ramped up the practice to target the assets and ill-gotten gains of drug kingpins, criminal organizations, and money launderers.

And to encourage law enforcement agencies to use this powerful new tool, Congress empowered federal agencies to retain the proceeds of successful forfeitures, and authorized them to share the funds with state and local agencies that participate in forfeiture cases through what is known as the “equitable sharing” program.

In other words, lawmakers empowered agencies to seize their way to bigger budgets. It should come as no surprise that forfeiture exploded in the United States.

In 1985, the first year that funds could be retained, forfeiture generated just $27 million. By 2012, the figure had grown to $4.3 billion. Today, both the Treasury and Justice departments maintain forfeiture funds containing billions of dollars in forfeiture revenues. Each year, hundreds of millions of dollars are paid out to state and local agencies through equitable sharing.

These are vast sums of money—in fact, some law enforcement agencies are dependent on forfeiture revenues to finance their operations—yet none of this money goes through the normal appropriations process. This severely undermines oversight and accountability at all levels of government, and directly encourages state and local agencies to flout more restrictive state laws.

Forfeiture law, meanwhile, suffers from a lack of adequate due process protections. Officers can seize currency or property even without actual evidence of criminality. Often, suspicion alone is asserted to justify a seizure.

Innocent property owners who contest seizures may believe they will get their day in court, but few cases actually make it before a judge. Most are resolved through the tortuous and opaque “administrative forfeiture” process in which the agency that seized the property—and stands to gain financially from keeping it—plays judge, prosecutor, and jury all in one.

And for those few people who do make it to court, they quickly discover that the deck is stacked against them. Prosecutors need to prove that property is forfeitable only by a preponderance of the evidence, a standard far lower than “beyond a reasonable doubt.” The owner then bears the burden of essentially proving his own innocence, a feat he must accomplish without an attorney if he cannot afford one.

With so few due process protections and so strong and perverse a financial incentive, it is no wonder that gross abuses of civil forfeiture have made headlines in recent years.

For instance, a sheriff in Oklahoma allowed a meth dealer to go free in exchange for $10,000 in cash he was carrying when he was arrested. An insurance adjuster passing through Tennessee had $22,000 seized without evidence of wrongdoing. Police in Tenaha, Texas, repeatedly targeted minority and out-of-state drivers for roadside seizures for three years, threatening and coercing them into “voluntarily” forfeiting their money and valuables.

These abusive practices have prompted a nationwide movement to rein in forfeiture.

Thirty states have reformed their civil forfeiture laws in recent years. Some have even abolished civil forfeiture altogether. The deficiencies in forfeiture law even prompted Justice Clarence Thomas to cast doubt on the constitutionality of the modern practice. And just weeks ago, the Supreme Court ruled unanimously that the Eighth Amendment’s excessive fines clause applies to states, and that local and state property seizures can be constitutionally excessive.

Now, Congress is once again stepping up to the plate with the reintroduction of the FAIR Act, a bill that proposes sweeping reforms in line with those proposed by The Heritage Foundation and a bipartisan group of advocacy organizations.

The bill would raise the standard of proof in federal forfeiture cases to “clear and convincing evidence,” a much higher bar than the current “preponderance of the evidence” standard. That would mirror numerous state-level reforms adopted throughout the country.

The proposal would also ensure that the burden of proof in these cases rests on the government, which would have to prove that a property owner used or consented to the use of his property for a criminal act. Indigent property owners would also be afforded legal counsel in all forfeiture cases.

Crucially, the FAIR Act would eliminate the forfeiture financial incentive by abolishing the equitable sharing program, and mandating that all federal forfeiture proceeds be returned to the Treasury’s General Fund to be appropriated by Congress. Law enforcement agencies would no longer be incentivized to treat forfeiture as a revenue generator rather than a law enforcement tool.

Walberg first introduced the FAIR Act in 2014. In these last five years, civil forfeiture reform has risen to national prominence and emerged as a clear, bipartisan issue. In polls, substantial majorities of Americans favor reining in civil forfeiture, and 76 percent of the public would actually be more likely to vote for candidates who embrace reform.

Clearly, the American people have spoken, and Congress ought to listen.