No, Vox, ‘Small Government’ Does Not Mean White Nationalism 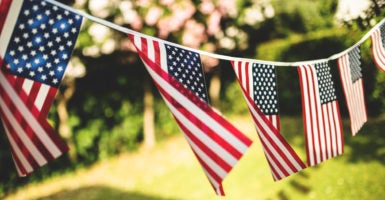 According to a recent article in Vox, conservatives who denounce government overreach aren’t really concerned about burdensome regulations.

No—it turns out the “language of small government” is really just “a handmaiden to ethno-nationalism.”

Roberts is both misguided and self-deluded, as he conveniently overlooks a few important factors.

Most worrisomely, he ignores the fact that bureaucratic red tape and regulations are a burden to everyone, regardless of race—and they impose particularly heavy costs on poor people and minorities.

The Constitution dictates that the American government is one of limited, enumerated powers, separated into three distinct branches with three distinct roles.

Any branch granted power by the Constitution can do only what that particular power grant authorizes it to do, and the Constitution does not grant powers generally to the government “as a whole.”

The powers not granted expressly to one of the three branches of the federal government are reserved to the state governments.

This principle of vertical power sharing between the national and state governments is called “federalism.”

Justice Anthony Kennedy once beautifully explained the principle, even if he has not always been consistent in upholding it:

Federalism is more than an exercise in setting the boundary between different institutions of government for their own integrity. State sovereignty is not just an end in itself. Rather, federalism secures to citizens the liberties that derive from a diffusion of sovereign power. … Federalism protects the liberty of the individual from arbitrary power. When government acts in excess of its lawful powers, that liberty is at stake.

When a branch of government steps beyond the limits of its power—when it “overreaches” the words of the Constitution itself—it tramples onto the liberties of the American people. Not just white people, but all people.

Further, conservatives generally believe that just because a federal, state, or local government may act under its constitutional authority does not mean it is prudent for it to do so.

This is often expressed as the principle of “small government.” Small government necessarily correlates to a freer people. In the words of President Ronald Reagan, “As government expands, liberty contracts.”

The idea that conservatives use the language of “limited government” to oppress others is exactly backward. Conservatives support limited government precisely because they understand the oppressive nature of a large and centralized power that seeks to regulate every aspect of life.

The Problem With Government Overreach

The New York Times piece about “coal rolling” featured a tiny portion of Americans giving voice to a specific grievance.

For Vox to cite that grievance as somehow indicative of an entire political philosophy’s relation to white nationalism is not just bad journalism—it’s intellectual dishonesty.

Government overreach neither begins nor ends with the inability to spew black smoke from a truck. Its impact is not limited to white nationalist men, or white men broadly, or even white people at all.

The grip of overregulation and overcriminalization suffocates everyone, without exception. It is not about white nationalism. It’s about liberty.

Government overreach is about John Duarte, a farmer in California who was threatened with the loss of his farm for plowing his fields without a government permit.

It’s about the 500 people who almost lost their jobs because the Environmental Protection Agency insisted that temporary, shallow pools on Duarte’s land were “navigable waters” under federal jurisdiction.

It’s about the Little Sisters of the Poor, the Roman Catholic religious institute for women, who the federal government would force to choose between compliance with the Affordable Care Act and compliance with the sincere and deeply held dictates of the Catholic Church.

It is about powerful and prohibitive occupational licensing systems that keep people from making an honest living, requiring them to get the costly and time-consuming consent of state and local governments.

These systems burden poorer Americans and minorities by inserting arbitrary obstacles between them and the ability to earn a living or start a business—obstacles like the hundreds (sometimes thousands) of dollars in licensing fees, or the time off to complete dozens, hundreds, sometimes thousands of hours in training—not to become lawyers, or dentists, or real estate agents, but to braid hair. To run a food cart. To act as a tour guide, to do landscaping, and to put together flower bouquets.

It’s about the more than 400 federal agencies, 5,000 criminal laws, and literally uncountable number of federal regulations that have made the law inaccesssible to even the most diligent of citizens.

It’s about the absurd prison sentences handed down on everyday people, acting in morally blameless ways, who never could have anticipated their actions were against the law.

It’s about the $2 trillion in regulatory costs imposed every year on Americans, based on an erroneous presumption that large, unaccountable government bureaucracies are the best means of protecting the public.

Limited Government Is Not White Nationalism

Limited government is a concept embraced by men and women of all backgrounds, races, ages, and religions. Its proponents include accomplished African-Americans like economist Thomas Sowell, renowned surgeon Dr. Ben Carson, and Kay Coles James of the NASA Advisory Council.

Asian-Americans groups have also organized around the call for lower taxes and reducing excessive government regulations.

Why? Because oppressive philosophies like white nationalism require a large government powerful enough to enforce the philosophy.

The most egregious instances of oppression have always been carried out with the power of a strong, centralized government: slavery, the disarmament of African-Americans during Reconstruction, the relocation of Japanese Americans to internment camps during World War II, the segregated public schools of the Jim Crow South.

In each of these instances, federal and state governments undertook to impose laws and regulations in excess of both their constitutional authority and the limits of public necessity. They were the result of government power grabs, not the result of limited government.

History speaks plainly to this issue. Decrying government overreach and appealing to principles of limited government, confined to its constitutionally directed boundaries, has nothing whatsoever to do with the ideology of white nationalism.

Asserting otherwise is a tactless, lowbrow non-argument that refuses to engage honestly with the philosophy of limited government as it is articulated by conservatives.

It also prevents the kind of honest conversations about reducing government overreach that could actually help the very people that white nationalists abhor. This, more than the mischaracterization itself, is tragic and unacceptable.