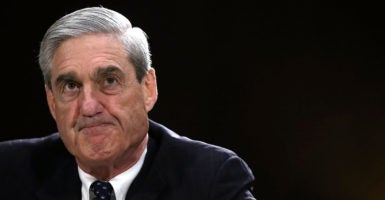 Special counsel Robert Mueller, pictured here when he was FBI director, ended his 22-monthslong investigation into Russian interference in the 2016 election with no more indictments. (Photo: Alex Wong/Getty Images)

Democrats are considering next steps following the conclusion of special counsel Robert Mueller’s investigation into Russian meddling in the 2016 election, which found that Donald Trump and his associates did not conspire with Russia to win the presidency.

Mueller transmitted the results of his 22-month probe Friday to Attorney General William Barr without seeking any more indictments.

Barr, in a letter Sunday to House and Senate committee leaders, said Mueller found no evidence linking the Trump campaign to Russian interference in the election and made no determination of whether the president sought to obstruct justice by impeding the probe.

Barr said he and Deputy Attorney General Rod Rosenstein, after considering evidence compiled by Mueller’s team, decided that Trump had not attempted to obstruct justice.

But key Democrats say they aren’t satisfied with the findings of the Mueller report, despite the work by the special counsel’s team of 19 lawyers and 40 FBI agents, which conducted 500 interviews, issued 2,800 subpoenas, and executed 500 search warrants.

1. Release of the Full Mueller Report

“Attorney General Barr’s letter raises as many questions as it answers,” Pelosi said in a prepared statement. “The fact that Special Counsel Mueller’s report does not exonerate the president on a charge as serious as obstruction of justice demonstrates how urgent it is that the full report and underlying documentation be made public without any further delay.”

Some Republicans, too, called for release of the full report, or as much as possible under regulations designed to protect grand jury proceedings and the rights of those not charged with crimes.

2.  Testimony by the Attorney General

“In light of the very concerning discrepancies and final decision making at the Justice Department following the Special Counsel report, where Mueller did not exonerate the President, we will be calling Attorney General Barr in to testify before @HouseJudiciary in the near future,” Nadler tweeted Sunday.

“Mueller conducted [a] twenty-two month investigation,” Jeffries tweeted Sunday. “He did not exonerate on Obstruction of Justice. But Trump-appointed AG takes only two days to clear Individual 1? Bill Barr must release entire #MuellerReport and testify before Congress. Immediately.”

Rep. Adam Schiff, D-Calif., chairman of the House Intelligence Committee, says he thinks there is “significant evidence of collusion” between Trump and Russia.

“There’s a difference between compelling evidence of collusion and whether the special counsel concludes that he can prove beyond a reasonable doubt the criminal charge of conspiracy,” Schiff said Sunday on ABC’s “This Week,” before Barr characterized Mueller’s major findings.

“I leave that decision to Bob Mueller, and I have full confidence in him,” Schiff said.

Rep. Gerry Connolly, D-Va., also calling for release of the entire Mueller report, went so far as to say that the report doesn’t address Trump’s interactions with Russia.

4.   Impeachment as an Option

Schiff also has also not ruled out the possibility of impeaching Trump.

“It’s really too early to make those judgments,” Schiff said of impeachment on “This Week.” “We need to see the report and then we’ll all have a factual basis. … In the absence of those facts, those judgments are impossible to make.”

Nadler, appearing on CNN’s “State of the Union,” hinted that congressional Democrats aren’t satisfied with the findings of the Mueller report.