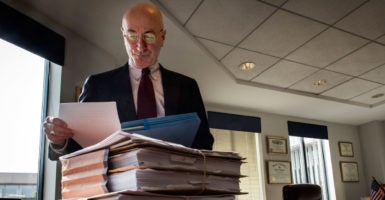 Mark Robbins, vice chairman and acting chairman of the Merit Systems Protection Board, was the last appointed person remaining on the board until his term expired, with a stack of case files in his office on Feb. 6 in Washington, D.C. (Photo: Bill O'Leary/The Washington Post via Getty Images)

That abdication of responsibility has now left one agency—the Merit Systems Protection Board—with no political appointees at all.

Few people outside of Washington, D.C., have even heard of the Merit Systems Protection Board, but that doesn’t mean it isn’t doing important work.

The three-member board is responsible for hearing appeals related to the firing and serious punishment of federal employees.

Yet, it was left totally vacant when the last remaining board member’s term expired at the end of February.

The board has been in bad shape for longer, though. Since January 2017, it had been down to one member—meaning it could not decide any appeals since two board members are needed to form a quorum. There are now nearly 2,000 appeals waiting in the queue to be heard.

Reaction to the Merit Systems Protection Board’s incapacity has been mixed. While The Washington Post warned of the “dire consequences” of “eliminating the guardian of our merit system,” some conservatives have questioned if the board is necessary at all.

Tom Schatz, president of Citizens Against Government Waste, writing recently in The Hill, argued that the Merit Systems Protection Board is “a significant hurdle to getting rid of bad federal employees” that we would be better off without.

Back in 2011, long before the current spate of vacancies, then-Sen. Tom Coburn, R-Okla., wrote, “[While] defenders of the [Merit Systems Protection Board] will contend that there needs to be an independent, third-party adjudicatory system for federal employee appeals … the judicial system already serves that function.”

As I recently testified before Congress, while the board may seem like an unnecessary layer of insulation girding public-sector employees from accountability, letting it wither on the vine is a bad idea.

If the Merit Systems Protection Board ceased to be, the greatest beneficiary would be public-sector unions. Union members, after all, don’t need to go to the board to protest serious disciplinary action by their managers. They can go to arbitration, often accompanied by a union representative working on “official time” and thus paid for by taxpayer dollars.

Meanwhile, nonunion employees would be left to lawyer up (on their own dime) and go to court against the federal government. It would not take long for nonunionized federal employees to wonder whether union dues might be worth the expense after all.

Fully staffing the Merit Systems Protection Board will also allow the federal government to finally remove many federal employees from the civil service.

Though some see the board as a serious obstacle to firing federal employees, the agency affirms personnel decisions about 90 percent of the time. Thus, the vast majority of the federal employees waiting for their appeal to be heard—many of whom might be getting paid while they wait—will lose before the board once their appeals are finally heard.

Another reason to maintain the board, at least for the time being, is the mind-boggling complexity of the Civil Service Reform Act. That’s the statute that dictates how federal employees are hired and fired, paid and promoted, and that area of the law is long overdue for reform.

Until it is, however, maintaining a board of experts who know the system well makes sense.

As Supreme Court Justice Samuel Alito put it in oral arguments during a recent Civil Service Reform Act case, “No ordinary lawyer could read these statutes and figure out what they are supposed to do.”

Alito went on to ask whether “somebody who takes pleasure out of pulling the wings off flies” had a hand in drafting the statute.

Today, judges do not need to grapple with the full complexity of the Civil Service Reform Act. Federal employees who appeal a Merit Systems Protection Board decision to the Federal Circuit do not get a trial de novo; that is, a trial from scratch wherein new evidence is introduced and weighed.

The Federal Circuit reviews the record from the board hearing to ensure the board followed the correct procedure and did not make any obvious errors. Perhaps unsurprisingly, from 2005 to 2015, the Federal Circuit upheld the board’s decisions 92 percent of the time.

If the Merit Systems Protection Board did not exist, federal judges would either need to become much more intimately familiar with the fine art of pulling the wings off flies—i.e., the Civil Service Reform Act—or give agencies accused of violating merit system principles the same degree of deference they give the board now.

If Alito is right, the latter is far more likely to occur than the former. With a greater measure of discretion, ideologically polarized agencies could purify their own ranks of dissenters or skew their hiring processes to usher in fellow believers.

Admitting the necessity of a functional Merit Systems Protection Board, given the current structure of our civil service system, should not be read as an endorsement of the status quo, however.

The board is an indispensable pillar of a badly outdated structure built 40 years ago and barely remodeled since. The entire architecture of the Civil Service Reform Act should be reimagined.

As a start, Congress should greatly simplify the administrative appeals process, creating a single forum for appeals of adverse agency actions.

That system existed prior to 1978 and the dissolution of the Civil Service Commission—and it worked well. A modern iteration of the commission could more expeditiously settle appeals and deliver justice for the appellant and the agency.

Splitting responsibility for appeals among several agencies does not guarantee more effective enforcement. The only thing it ensures is a less efficient process.

The caption for this article has been updated to clarify that Robbins’ term is now over.