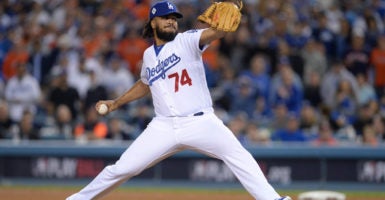 Los Angeles Dodgers relief pitcher Kenley Jansen throws a pitch against the Houston Astros in the 8th inning in Game 6 of the 2017 World Series at Dodger Stadium. (Photo: Gary A. Vasquez/USA TODAY Sports/Newscom)

Just a few years ago, the idea that the National Football League would be knocked off its pedestal as America’s top sport would have been laughable.

While kneeling for the anthem is technically against the NFL operation guidelines, the league has vacillated between turning a blind eye to and opposing the actions. All the while, the powers that be ruthlessly crack down on minor uniform infractions, end zone celebrations, and tributes to cops and 9/11 victims.

The result has been increasing discontent over what has been frequently called America’s “passion.” Though football still technically rests at the top of the heap as far as overall ratings, a significant shift is taking place. Baseball, America’s original pastime, is retaking its spot in our hearts.

Remarkably, Game 5 of the World Series, a titanic struggle between the Houston Astros and Los Angeles Dodgers, surpassed Sunday Night Football in the ratings with 19 million viewers. This is now the second year in a row that it has happened.

And a recently released survey showed that Major League Baseball has surpassed the NFL in popularity. Meanwhile, Morning Consult recently found that the NFL’s brand popularity had fallen to its lowest point since it began tracking it in May.

The signs that a torch is passing are unmistakable.

A combination of boring games, worrying science over brain injuries, and noxious politics is dragging down the NFL, and baseball is reaping the benefits.

The NFL was, until recently, a uniting cultural institution for this country. It was one of the few things that Americans of almost any background and political affiliation could bond over and enjoy.

But the league has made a number of self-inflicted missteps that have failed to ease the worries of those who think the sport is too dangerous and have alienated the game’s most fervent supporters.

Whether intentionally or not, baseball has stepped up at the right time.

Two years of fantastic World Series games certainly help, regardless of the ball juicing controversy. Even without the presence of the New York Yankees, there has been a huge amount of interest in the games.

Whether it’s seeing which team can break a World Series curse, such as with last year’s Indians-Cubs matchup, or a competitive series between highly talented teams as we have this year, the game is simply fun for dedicated and casual fans.

But importantly, the game has mostly avoided the political battles that have embroiled the NFL and the NBA.

One MLB player kneeled for the national anthem, Bruce Maxwell of the Oakland Athletics. But he’s unlikely to be carrying out these protests in a major league uniform any time soon.

Since the protest, Maxwell has gone on to accuse a waiter in Alabama for not serving him over politics, an allegation the restaurant vehemently denies, and has gotten himself arrested for allegedly brandishing a firearm at a food delivery person.

It would be wise for the league to put a lid on the controversy now and, as Jon Del Arroz wrote in The Federalist, “keep America’s pastime a fun, family-friendly celebration of American culture for decades to come.”

Sports rise and fall in America.

At one time boxing and horse racing were ubiquitous, but they receded as the NFL and other sports took their place.

Now, poor decisions at a time when the sport is literally under the microscope have opened the door for something else to take its place.

Americans badly need something they can still rally around.

Back to back phenomenal World Series matchups have opened the door for a sport as American as apple pie to reassert itself and become something that unites the country once again.

Baseball has an amazing opportunity to step into the void, if it doesn’t blow it.