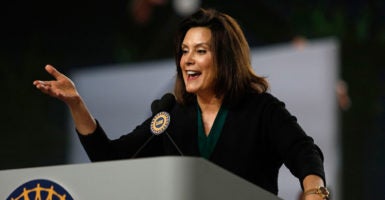 Whitmer’s budget proposal will include a 45-cent gas tax increase, which would be phased in over three separate intervals, the governor’s spokeswoman Tiffany Brown told reporters Monday. The rate would begin increasing in October, hit its second phase in April 2020, and ease into its final phase by the end of that year.

The increase is expected to generate roughly $2 billion a year in additional revenue for roads, according to media reports. Whitmer, a Democrat who ran on fixing Michigan’s roads, will present her idea to lawmakers Tuesday during a joint meeting of the House and Senate appropriations committees.

Whitmer’s plan would make Michigan’s one of the highest fuel tax rates in the country, behind the likes of California and Pennsylvania. Michigan motorists currently pay 26.3 cents per gallon. Total at-pump costs in the state are already the sixth-highest in the nation, in part because Michigan applies its 6 percent sales tax to fuel purchases.

Michigan Republicans have mixed feelings about such an increase.

Michigan Republican Party Chair Laura Cox panned the idea, saying in a statement that residents “deserve real solutions on this critical issue, not a tax and spend solution which places the burden on the state’s overtaxed families.”

Others are more supportive.

“By front loading it as much as she is, you’re able to accomplish more right away,” he said. Sikkema is a Republican co-chair of the Michigan Consensus Policy Project group that pitched a 47-cent gas tax increase over nine years.

Conservatives are opposed to Whitmer’s proposal. Tony Daunt, executive director of the conservative Michigan Freedom Fund, for one, told reporters that the proposed fuel tax hike is a “terrible idea.” He also suggested his group would fight tooth and nail any attempt to foist higher taxes on motorists.

“I think a show of contempt of this magnitude for Michigan voters and taxpayers will certainly get our attention and the attention of millions of hardworking Michiganders across the state,” Daunt said.

Whitmer’s idea comes almost two years after former Democratic California Gov. Jerry Brown signed a law in 2017 imposing a 12 cents-a-gallon increase on citizens and raising the tax on diesel fuel by 20 cents a gallon. It also implemented an additional charge to annual vehicle license fees ranging from $25 to $175 depending on the car’s value.

California ranks seventh-highest in the country when it comes to total taxes and fees, according to figures calculated by the American Petroleum Institute. The recent increase makes California’s the second-highest gas tax in the country behind Pennsylvania. The Golden State’s gas tax would increase from 40 to 52 cpg.

Michigan’s increase would bring the gas tax from the 26 cent-per-gallon gas tax to 71 cents per gallon, Kurt Weiss of the state budget office told UpNorthLive.