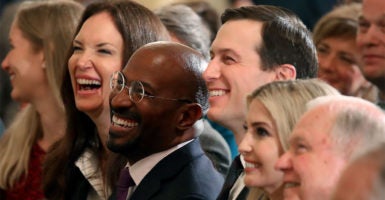 Van Jones, a former Obama administration official and leading commentator on the left, responded Friday to liberal critics who call him a “sellout” for agreeing to talk about prison reform at a major gathering of conservatives.

“I don’t have to listen to you. I care about the people that are locked up. That’s what I care about,” Jones said, prompting applause from the crowd at the Conservative Political Action Conference.

Jones, a CNN contributor who also has his own show on that cable outlet, accepted an invitation to talk about criminal justice reform with Matt Schlapp, chairman of the American Conservative Union, which organizes CPAC.

As part of CNN panels, Jones occasionally has credited President Donald Trump for some policies and remarks. He did so at CPAC as well.

“My problem is not the battleground,” Jones told the CPAC crowd. “My problem is there are common ground issues where we do agree and we won’t work together on those all too often, and that has got to stop in America.”

As one of relatively few Democrats who would reach out to Trump to help create solutions, Jones has been attacked on Twitter and other social media. He has been called a “sellout” not only for attending CPAC, but generally criticized for working with conservatives to create comprehensive criminal justice reform.

In a major bipartisan victory for Trump, Congress in December passed and the president signed a federal prison reform bill called the First Step Act.

In a commentary for The Daily Signal, Heritage Foundation legal expert John Malcolm described the new law as “instructing federal prison officials to objectively assess each federal inmate’s risk” of returning to bad behavior, and to give inmates incentives to enroll in “programming to change their behavioral issues, whether that is substance abuse, mental health, anger management problems, or something else.”

Schlapp praised Pat Nolan, a former California state lawmaker who is director of the American Conservative Union Foundation’s Center for Criminal Justice Reform, as the appropriate face of the issue.

Nolan has described his own experience with America’s criminal justice system as “un-American.” Jones called Nolan a hero and seconded Schlapp’s sentiments:

If you think it’s tough—and it is tough to be at a high federal level and have a prosecutor coming after you—think about the people who don’t have a dollar to their name. When the prosecutors come after them, they do not have the ability to defend themselves.

Jones told the CPAC audience that former House Speaker and presidential candidate Newt Gingrich told him he was doing a bad job of advocating criminal justice reform because he was speaking about it only from the perspective of racial justice.

“He told me, ‘As a conservative, we have a big, failed government bureaucracy that eats up money and eats up rights, that has no accountability, that sends people home bitter and not better.’”

Jones said Gingrich showed empathy for those who needed a second chance.

He paraphrased Gingrich as telling him: “As a Christian conservative, where are the second chances? Where is the redemption? Someone makes a mistake, fine, but when they come home, they cannot get a job, they can’t get a student loan.”

Jones said both parties should be proud of their efforts on criminal justice reform. He credited President Barack Obama for raising the issue, but said Obama failed to win passage of any legislation.

On the other hand, he noted, Trump was able to “get across the finish line” with the First Step Act.

Jones and Schlapp helped craft the legislation, which the president signed Dec. 21.