Too Many Liberals Want to Believe America Is Racist 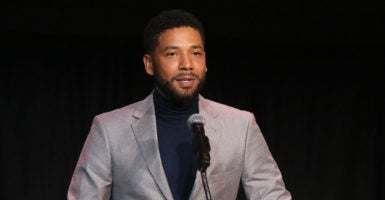 The reactions of many on the left to the case of Jussie Smollett prove two important things:

1. There is little racism in America.

There is no doubt that most Americans on the left, including black Americans, are distraught over the fact that Smollett faked the “racist” attack on him. Apparently, leftists, Democratic leaders, and, most depressingly, many of his fellow blacks wish Smollett had been attacked by white racist homophobes.

Rep. Eric Swalwell, D-Calif., a white leftist, tweeted, “I hope this was not something that Mr. Smollett did to himself, or created … .”

Washington Post columnist Jonathan Capehart told MSNBC there has been “an atmosphere of menace and hate” since Donald Trump was elected president, which made “people want to believe” Smollett’s story. Exactly. Capehart, a black leftist, wanted to believe that racists yelling “This is MAGA country” beat up blacks.

Another black leftist who writes hate columns for The Washington Post, Nana Efua Mumford, wrote: “I wanted to believe Smollett. I really did.” Again, exactly. Mumford wanted to believe that racists yelling “This is MAGA country” beat up blacks.

Corey Townsend, the social media editor of The Root, a black-oriented website (founded in 2008 by Harvard black studies scholar Henry Louis Gates Jr.), opened his column on his private doubts that Smollett was attacked as he claimed with the words, “I wanted to be wrong.” Three paragraphs later: “But still, I wanted to be wrong.”

This should tell you a great deal about how morally and psychologically sick the left is. And their reactions prove how little racism there really is in America.

Here’s the proof of both these assertions: When American Jews, even most left-wing Jews, heard of the mass killing of Jews at a Pittsburgh synagogue, how many were hoping the shooter was truly an anti-Semite, and how many were hoping he was a mentally deranged individual who could have just as easily shot up a church?

Or, if a well-known Jew had been beaten at 2 a.m. on a Chicago street, how many American Jews would have wanted the attackers to be Jew-haters, and how many would have wished they were just thugs who wanted money?

As a Jew who has been deeply involved in Jewish culture all my life, I am pretty certain the majority of Jews—certainly liberal and conservative Jews, and even most left-wing Jews—would have wished that neither the Pittsburgh synagogue nor the theoretical attack on a Chicago street I conjured up were perpetrated by anti-Semites.

Why is that? Why do almost all Jews wish attackers of Jews not be anti-Semites, but so many blacks and so many white leftists wish Smollett had been attacked by racists?

And why is that? Because the left and many American blacks are politically and personally dependent on one of the greatest mass libels in history—namely, that America is a racist country.

If just 1 of 5 black Americans woke up tomorrow and announced, “You know, this a great country for anyone, including a black person, to live in, and the truth is the vast majority of white Americans bear no ill will toward blacks (or any other race or ethnicity),” that would end the Democrats’ chances of winning national elections. The Democratic Party is dependent on nearly universal black acceptance of the leftist libel of America.

And what about the personal? Why do so many black Americans, living in the freest country for all its citizens—and in the least racist multiracial, multiethnic country in history—want to believe America is racist? That is one of the most important questions all Americans need address at this time.

And there is another one, which I posed in my column last week: Does the left believe its own lies?