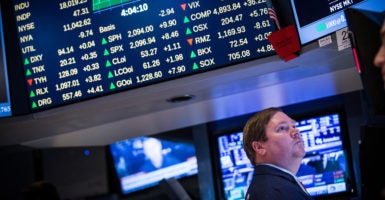 There’s a pervasive myth out there that corporate stock buybacks are a sign of corporate self-indulgence, leaving workers hung out to dry and weakening the American economy.

Economic reality is the exact opposite.

When a company repurchases its stock, corporate executives are often humblingly admitting that their business isn’t as profitable as it once was.

When businesses have unused profits, they can give part of them back to their investors by repurchasing their stocks at market value—just like you or I could—or by paying out a dividend.

That allows investors to reinvest the unused profits in other, more profitable enterprises.

Harley-Davidson’s announced plant closing and simultaneous $15 million in stock buybacks is a popular example of the supposed evils of corporate greed.

By transferring the millions back to shareholders through repurchases, those investors are now able to redirect that money to other investments that have a more promising future. Harley-Davidson’s sales have been declining for years.

Those new investments will also need workers to build, design, and manufacture whatever the future demands.

If instead, Harley-Davidson poured more money into a U.S. market that did not want to buy its bikes, the investment would still not sustain long-term jobs. Rather, it would just prolong the company’s decline, and ultimately, everyone—including the employees—would be worse off.

Sens. Charles Schumer, D-N.Y., and Bernie Sanders, I-Vt., would require businesses to raise wages and offer more generous benefits before they could repurchase their own shares.

Both of these policies would similarly make American workers worse off by trapping profits in struggling firms.

Unlike the Schumer-Sanders proposal, however, Rubio seems to indicate he’d like to use any revenue gained from the new higher investor taxes for something called “full expensing”; that is, the ability to deduct investments when they are made. On that score, the Florida Republican should be commended.

In addition to the tax cuts themselves, the 2017 Tax Cuts and Jobs Act adjusted business investment rules that are equally important for American workers’ gaining higher wages and more job availability.

The U.S. tax code generally forces years of waiting between when businesses pay for an investment and when they can deduct the full cost on their taxes. This raises the cost of investments and shrinks incomes.

The tax cuts temporarily fixed this problem for some investments through “expensing,” allowing businesses to write off—or depreciate—new investments immediately.

Rubio correctly notes that “long-life assets like structures did not receive enhanced depreciation treatment at all.” That was a major oversight.

Buildings, such as new manufacturing floor space and storefronts, still have to use the costly and complicated old system.

The budgetary cost of expanding expensing to all investments is high in the first few years of the reform because of transition costs, but the economic benefits of the new system are well worth the short-term budget impact.

Rubio should be commended for championing expensing as the best way to support American businesses as they continue to add new jobs and raise wages in the U.S. at rates not seen since before the Great Recession of a decade ago.

The proposal to tax stock buybacks—if it has the intended effect of stopping the activity—will likely not raise any revenue, let alone enough to fund permanent full expensing.

Expensing should not be tied to raising business or investor taxes elsewhere. Such a policy would undermine the success of expensing.