What Lincoln Foresaw Would Occur If Maxine Waters, Others Got Their Way With Mob Justice 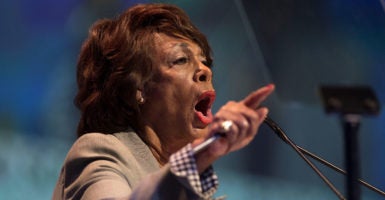 In 1836, at the Young Men’s Lyceum in Springfield, Illinois, a 28-year-old lawyer named Abraham Lincoln delivered one of his finest addresses.

Lincoln condemned the sharp increase of mobs in America, which had exploded in number as the debate over slavery and regional animosity intensified.

“Accounts of outrages committed by mobs, form the every-day news of the times,” Lincoln said.

Many of these mobs had turned violent and subverted the law. They were undermining free government.

Calls for civility are sometimes vapid excuses to shut down political dissent. But what’s occurring now in America is not just heated debate at political rallies, it’s a surge in mob activity directed at political opponents in everyday life.

In just the past few weeks we’ve seen the harassment of a Trump Cabinet member, Kirstjen Nielsen, at a District of Columbia restaurant.

Florida Attorney General Pam Bondi, a Republican, was, somewhat ironically, accosted as she left a movie about Fred Rogers, or “Mr. Rogers,” the nationally beloved children’s show host famous for welcoming people to his fictional neighborhood.

These incidents were bad enough, but some are calling for much more.

Over the weekend, the owners of a Virginia restaurant booted White House press secretary Sarah Huckabee Sanders because of her association with the Trump administration.

This incident provoked the debate over freedom of association, but then Rep. Maxine Waters, D-Calif., stepped into the fray and made the situation worse.

At a rally Saturday, the Los Angeles congresswoman called for mobs to go after political opponents wherever they may be.

“Let’s make sure we show up wherever we have to show up. And if you see anybody from that Cabinet in a restaurant, in a department store, at a gasoline station, you get out and you create a crowd,” Waters yelled.

Some activists have grabbed hold of these recent incidents to call for more radical action. One writer on a left-wing blog, Splinter, went even further than Waters. In an article titled “This Is Just the Beginning,” he took the next big leap to essentially condoning outright violence:

Read a recent history book. The U.S. had thousands of domestic bombings per year in the early 1970s. This is what happens when citizens decide en masse that their political system is corrupt, racist, and unresponsive. The people out of power have only just begun to flex their dissatisfaction. The day will come, sooner that you all think, when Trump administration officials will look back fondly on the time when all they had to worry about was getting hollered at at a Mexican restaurant.

Of course, Lincoln in his Lyceum address begged to differ.

“There is no grievance that is a fit object of redress by mob law,” Lincoln said. “In any case that arises, as for instance, the promulgation of abolitionism, one of two positions is necessarily true; that is, the thing is right within itself, and therefore deserves the protection of all law and all good citizens; or, it is wrong, and therefore proper to be prohibited by legal enactments; and in neither case, is the interposition of mob law either necessary, justifiable, or excusable.”

Some, even on the left, have been a little unnerved by calls for mobs, whether violent or nonviolent, to attack political foes in everyday life.

“Those who are insisting that we are in a special moment justifying incivility should think for a moment how many Americans might find their own special moment,” The Washington Post said in an editorial. “How hard is it to imagine, for example, people who strongly believe that abortion is murder deciding that judges or other officials who protect abortion rights should not be able to live peaceably with their families?”

Her fellow Democrats have voiced some condemnation of Waters’ demand for mobs to harass political opponents. Much of this criticism has been muted, though.

In the crucial months ahead, we must strive to make America beautiful again. Trump’s daily lack of civility has provoked responses that are predictable but unacceptable. As we go forward, we must conduct elections in a way that achieves unity from sea to shining sea. https://t.co/vlpqOBLK4R

Sen. Cory Booker, D-N.J., said that “there’s nothing wrong” with confronting Trump administration officials, but people should do it in a way that “leads with love.”

Sen. Booker on Rep. Waters' comments: "There's nothing wrong" with confronting Trump admin. officials in a way that "leads with love." https://t.co/75hozKVI5n

Senate Minority Leader Chuck Schumer, D-N.Y., offered the strongest condemnation of Waters, saying that calling for harassment of political opponents is “not American.”

One would hope that mob law and mob justice don’t become the norm, but we’ve already seen a steady uptick in the mentality that leads to that point.

We’ve seen it with the mobs that descended on historic statues to illegally pulverize them in the name of social justice. Now the mobs are coming for living people.

This kind of ugliness is a bad sign for our future.

Lincoln explained to his Springfield audience what could ultimately destroy the United States.

“Shall we expect some transatlantic military giant, to step the Ocean, and crush us at a blow?” Lincoln asked.

“At what point then is the approach of danger to be expected?” Lincoln asked again. “I answer, if it ever reach us, it must spring up amongst us. It cannot come from abroad. If destruction be our lot, we must ourselves be its author and finisher. As a nation of freemen, we must live through all time, or die by suicide.”

Passionate debates are good and healthy in a republic.

There was never a “golden age of civility” when all Americans got along, nor should we necessarily desire one.

Nevertheless, the ability to live together as free citizens in large part necessitates a respect for civil relations among us, where we look to persuasion and ballots to put our ideas in action, not brute intimidation of opponents.

The constitutional system the Founding Fathers built is strong, but it can’t survive when citizens en masse are ready to come to blows with one another on a semipermanent basis, are ready and willing to gin up mobs to go after one another for political disagreements.

That system shattered in 1860, and ended with the bloodiest period in our nation’s history.

This sort of crackup may, in fact, be what some want, but it’s unlikely to end well for those who believe in free institutions in the United States.