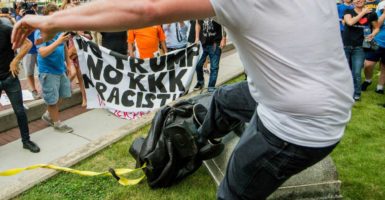 A protester kicks a toppled Confederate soldier statue after it was pulled down in Durham, North Carolina. (Photo: Casey Toth/TNS/Newscom)

Following the ugly incident that took place in Charlottesville, Virginia, this past weekend, an unruly mob took out its anger on a century-old statue in North Carolina.

It is a perfect example of how tribal and identity politics are raging out of control in America, and how radicals will continue to ratchet up their tactics to match one another.

While the media spent its time connecting riots to the political right, the hard left continued to step up its tactics to promote social discord, as it has been doing for years.

On Monday afternoon, a crowd of people in an “Emergency Durham Protest” marched down Durham’s Main Street, then made its way to the Durham County Courthouse.

The Herald Sun reported that organizations like the “Triangle People’s Assembly, Workers World Party, Industrial Workers of the World, Democratic Socialists of America, and the Antifa movement” were at the rally.

One of the participants, Eva Panjwani of the Workers World Party Durham, said in an interview:

This is really an opportunity, this moment of Charlottesville, to see what side of history we are choosing to side with. This is not a call to make someone to feel guilty or ashamed. This is a call to say this is an ask from people of color to say which side are you on.

The larger group was comprised of people demonstrating with various left-wing slogans such as a “No Trump, No KKK, No Racist USA” banner, pro-socialist Che Guevara shirts, and numerous odes to abolishing capitalism.

One individual held a sign that said, “Cops and clan go hand in hand,” as the group marched past police officers.

The crowd gathered in front of the courthouse and decided to target a statue that was created in memoriam to “the boys who wore the gray.” That is, the North Carolina soldiers who fought for the Confederate Army in the Civil War.

>>> I Went to Charlottesville During the Protests. Here’s What I Saw.

What followed was a scene reminiscent of the French Revolution or the war in Iraq.

The rage-filled protesters tore down the statue and proceeded to kick and desecrate it. The surging mass of people hooted and hollered as individuals took turns spitting on and flipping off the generic visage of a young Southern soldier.

The act of vandalism continued unabated, as authorities stood by and watched. Durham Police put out a statement saying that they did not interfere with the toppling because it happened on “county property, where county law enforcement officials were staffed.”

In the aftermath, some of the protesters took pictures in front of the crumpled-up bronze statue that had been pulverized in the fall.

Protesters are taking pictures around the fallen statue. #Durham pic.twitter.com/11GLhueqU1

Targeting this statue was seemingly an odd choice. It portrayed no individual specifically and was erected as a tribute in 1924 to the young boys, by that time old men, who had donned the uniform of the failed Confederate rebellion.

However, the attack was fitting as a mirror to the “alt-right” march that had taken place at the foot of a Gen. Robert E. Lee statue in Charlottesville. The individuals portrayed by the monuments were simply irrelevant.

This isn’t a battle over ideas or the Confederacy’s place in American history, it’s sheer and mindless identity politics.

American towns and cities are now increasingly being besieged by agitators who flaunt the law, direct their hate toward fellow citizens, and openly attack the crucial principles at the heart of the American way of life.

The resounding message that these events send is that in 2017, it’s impossible for this country to accept people of different creeds and points of views. You are either on the “right side of history,” as President Barack Obama said, or you are on the wrong side.

The narrative is increasingly join us, or be crushed.

Perhaps the protesters should pay more attention to what happened in our Civil War, which claimed more lives than all of our other wars combined.

Perhaps they should study the leaders who, however imperfectly, tried to bind regions and people together to move on from a civil feud that pitted brother against brother and American against American.

And perhaps they should have studied the people, like Lee and President Abraham Lincoln, who tried to piece the shattered puzzle of American nationhood back together.

Alas, those concepts were lost in a sordid trampling of an old, barely noticed statue. Unless leaders pay increased devotion to denouncing and taking action against these lawless demonstrations, mob rule is here to stay.