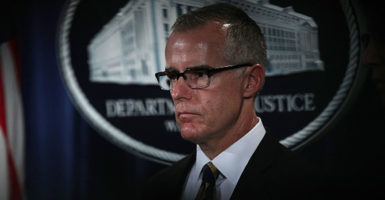 A new book by the FBI’s one-time No. 2 official seems to support suspicions of a Justice Department bias against President Donald Trump, said Senate Judiciary Chairman Lindsey Graham, R-S.C., who wants to put the former deputy director under oath.

Andrew McCabe, ousted from the FBI last year after an internal investigation, talks about his book in a “60 Minutes” interview to air Sunday in which he says top Justice Department officials in 2017 discussed how to oust Trump from office using the 25th Amendment.

Graham said that sounds like bias, and he also wants to find out why the FBI gained a warrant in 2016 to surveil a Trump campaign aide, Carter Page, under the Foreign Intelligence Surveillance Act.

“After Mr. McCabe’s ‘60 Minutes’ interview, it is imperative that he, and others, come before the Senate Judiciary Committee to fully explain how and why a FISA warrant was issued against Carter Page, and answer questions about what appears to be, now more than ever, bias against President Trump,” Graham said Thursday in a formal statement.

CBS News correspondent Scott Pelley, who did the interview with McCabe about his book “The Threat: How the FBI Protects America in the Age of Terror and Trump,” previewed their talk earlier Thursday on “CBS This Morning.”

“There were meetings at the Justice Department at which it was discussed whether the vice president and a majority of the Cabinet could be brought together to remove the president of the United States under the 25th Amendment,” Pelley said. “And the highest levels of American law enforcement were trying to figure out what to do with the president.”

The 25th Amendment allows for the vice president and a majority of Cabinet secretaries to determine whether a president is too physically or mentally impaired to do the job. The vice president would become acting president. If a president contests the move, Congress could remove him from office permanently by a two-thirds vote in each chamber.

“There is an elaborate process for the 25th Amendment, and [McCabe’s claim] seems incredibly far-fetched,” John Malcolm, head of the Institute for  Constitutional Government at The Heritage Foundation, told The Daily Signal. “McCabe may hate the president. He may think he’s a terrible person. But there is no evidence he is mentally incapacitated.”

The department’s Office of Professional Responsibility had recommended McCabe’s dismissal. McCabe served as acting FBI director after Trump fired James Comey in May 2017 and before the Senate confirmed Trump’s nomination of Christopher Wray for the job that August.

In the “60 Minutes” interview, McCabe says that Deputy Attorney General Rod Rosenstein talked several times about wearing a wire to spy on Trump, and that he was serious about it.

After initial reports that the No. 2 official at the Justice Department had talked privately about wearing a wire, Rosenstein said he had been joking.

“McCabe … says no, it came up more than once and it was so serious that he took it to the lawyers at the FBI to discuss it,” Pelley said of the interview.

Malcolm said he has serious doubts on this front.

“I would be very surprised if the things [McCabe] said about Rod Rosenstein were accurate,” Malcolm said. “I tend to believe Rod Rosenstein, that he was most likely joking.”