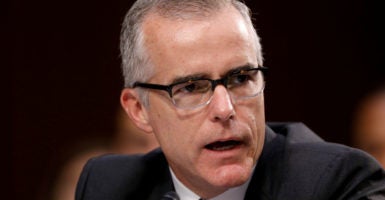 Andrew McCabe, the former No. 2 FBI official fired at the weekend by the attorney general, called his dismissal an attempt to undermine special counsel Robert Mueller’s investigation into Russian meddling in the 2016 election, according to a report by The New York Times.

Attorney General Jeff Sessions fired McCabe Friday night over allegations he authorized the disclosure of sensitive information to a reporter.

McCabe, the deputy FBI director who served as the bureau’s acting director after James Comey’s ousting last May by President Donald Trump, said he believes his dismissal is an effort to derail Mueller’s probe.

“The idea that I was dishonest is just wrong. This is part of an effort to discredit me as a witness,” McCabe told reporters Friday night shortly after his dismissal.

Some viewed the outgoing deputy director as a potential witness in the special counsel’s probe determining the degree with which Russia interfered in the 2016 presidential election, and whether Trump campaign officials colluded with the Kremlin.

A yet-to-be-released internal FBI report accuses McCabe of not being forthcoming about the nature of a conversation he authorized between FBI officials and a journalist.

McCabe had shown a lack of candor under oath on multiple occasions, Sessions said in a public statement shortly after the announcement of McCabe’s dismissal.

“The FBI expects every employee to adhere to the highest standards of honesty, integrity and accountability,” said the attorney general, who recused himself last May from ruling on aspects of any probe into Russia’s meddling in the election. “I have terminated the employment of Andrew McCabe effective immediately.”

Andrew McCabe FIRED, a great day for the hard working men and women of the FBI – A great day for Democracy. Sanctimonious James Comey was his boss and made McCabe look like a choirboy. He knew all about the lies and corruption going on at the highest levels of the FBI!

McCabe oversaw the FBI probes into both the Trump campaign and Hillary Clinton’s use of a private email server to conduct official business during her time as secretary of state.

McCabe publicly called out the White House on national television, denying that Comey had lost the support of rank-and-file FBI agents.

The president isn’t involved in decisions on whether to fire officials such as McCabe. Rather, veteran disciplinary officials advised the attorney general to oust McCabe, who already had been removed from the deputy director post by FBI Director Christopher Wray.

Nevertheless, Trump expounded on Twitter about the importance of pushing out McCabe.

“Andrew McCabe FIRED, a great day for the hard working men and women of the FBI–A great day for Democracy,” Trump told his Twitter followers at 12:08 a.m. Saturday morning. “Sanctimonious James Comey was his boss and made McCabe look like a choirboy. He knew all about the lies and corruption going on at the highest levels of the FBI!”

McCabe’s termination came two days before his official retirement date. It was not clear how, if at all, his dismissal will affect the size of his government pension.

The full text of Sessions’ statement:

After an extensive and fair investigation and according to Department of Justice procedure, the department’s Office of the Inspector General (OIG) provided its report on allegations of misconduct by Andrew McCabe to the FBI’s Office of Professional Responsibility (OPR).

The FBI’s OPR then reviewed the report and underlying documents and issued a disciplinary proposal recommending the dismissal of Mr. McCabe. Both the OIG and FBI OPR reports concluded that Mr. McCabe had made an unauthorized disclosure to the news media and lacked candor—including under oath—on multiple occasions.

The FBI expects every employee to adhere to the highest standards of honesty, integrity, and accountability. As the OPR proposal stated, ‘all FBI employees know that lacking candor under oath results in dismissal and that our integrity is our brand.’

Pursuant to Department Order 1202, and based on the report of the inspector general, the findings of the FBI Office of Professional Responsibility, and the recommendation of the department’s senior career official, I have terminated the employment of Andrew McCabe effective immediately.