FBI’s No. 2 Official Steps Down Amid Growing Suspicions by Trump Allies 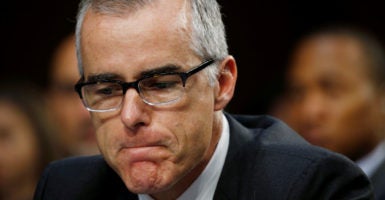 Andrew McCabe, the FBI’s embattled deputy director, announced his resignation Monday ahead of an anticipated inspector general report and likely release of a memo about the FBI’s conduct and use of a surveillance law on his watch.

McCabe reportedly has been “removed” from the bureau’s No. 2 position.

McCabe had been the FBI’s acting leader for just under three months after President Donald Trump fired James Comey as director and before he named, and the Senate confirmed, Christopher Wray as director.

Conservatives have voiced doubt over McCabe’s fairness and nonpartisanship. His wife, Jill, received almost $500,000 for her failed 2015 Virginia state Senate campaign from a political action committee run by then-Gov. Terry McAuliffe, a longtime confidante of Bill and Hillary Clinton.

Trump frequently criticized McCabe, alleging a conflict in the FBI’s role in the investigations of Hillary Clinton’s use of a private email server to conduct official business as secretary of state and the probe into alleged collusion between the Trump campaign and Russian government officials.

How can FBI Deputy Director Andrew McCabe, the man in charge, along with leakin’ James Comey, of the Phony Hillary Clinton investigation (including her 33,000 illegally deleted emails) be given $700,000 for wife’s campaign by Clinton Puppets during investigation?

White House press secretary Sarah Huckabee Sanders said the White House had no role in McCabe’s stepping down, and that the FBI would have more to say about the matter later.

Trump once asked McCabe how he voted in the 2016 presidential election, The Washington Post reported. McCabe responded that he didn’t vote, according to the report.

McCabe also appears to be indirectly referenced in the controversial exchanges of text messages between two FBI agents, Peter Strzok and Lisa Page, who figure in sensitive probes related to both Clinton and Trump.

In one, Strzok wrote: “I want to believe the path you threw out for consideration in Andy’s office—that there’s no way he [Trump] gets elected—but I’m afraid we can’t take that risk. It’s like an insurance policy in the unlikely event you die before you’re 40 … ”

The House is poised to vote on declassifying a four-page memo  from Rep. Devin Nunes,  R-Calif.,  chairman of the House intelligence committee, on the conduct of the Justice Department and the FBI in use of the Foreign Intelligence Surveillance Act, or FISA, related to Trump’s election and the transfer of government.

McCabe played a role in a leak of information on the Russia investigation, according to an excerpt from “Media Madness,” the new book by Fox News media critic Howard Kurtz, a report earlier Monday said.

He reportedly will be on leave for several weeks until he qualifies for full retirement benefits in March, already his stated time for leaving the bureau.