What We Can Learn From Ralph Northam’s Fall From Grace 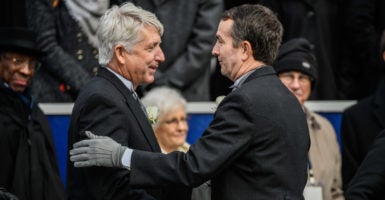 Ralph Northam, right, greets Mark Herring before the men are sworn in as Virginia's governor and attorney general, respectively, on Jan. 13, 2018, at the state Capitol in Richmond. Today, both Democrats are wracked by scandal over their decisions to put on blackface as young men. (Photo: Salwan Georges/The Washington Post via Getty Images)

For all of the light and hope America brings to the world, our experiment in democracy carries moments of darkness and shame. Often the light and the darkness compete for attention at the same moment in time.

In 1801, when this young nation shined bright with the peaceful transfer of power from one political party to another, darkness reigned as almost 1 million human beings lived in bondage in the new world.

Every single day in our nation’s history, we have moved toward building a more perfect union where all men and women are valued equally.

Today the struggle once again finds itself on the front page as Virginia Gov. Ralph Northam defends himself against charges of racism.

Most by now are familiar with the photo that appears on Northam’s medical school yearbook page in 1984: Two persons are pictured, one in blackface, the other in a Ku Klux Klan robe.

Northam, a Democrat, initially apologized for appearing in the “offensive and racist” photo, only to deny that it was him a day later in a press conference that generously could be described as weird and rambling.

And as of Wednesday, the state’s top three elected state officials, all Democrats, were mired in scandal as Attorney General Mark Herring, who already had called for Northam’s resignation, disclosed that he himself wore blackface to a college party in 1980.

Herring had thrown his support to Lt. Gov. Justin Fairfax, who now is accused publicly by a woman who says he sexually assaulted her at the Democratic National Convention in 2004.

Fairfax, followed by Herring, is next in line should the governor’s office become vacant.

Northam’s decision to keep his grip on power and his refusal to take responsibility for his actions are as bad as posing for the picture itself, if that is what he did.

We know the governor now denies that he is in the photo. But on that claim, both left and right give a collective side eye, though Northam says he has hired a private investigator to find out the origin of the photo and how it got in the yearbook. The governor did admit, however, to darkening his face with shoe polish for a Michael Jackson look-alike dance contest, also in 1984.

Northam refuses to resign because he does not want to be painted a racist for the rest of his life. He does not want his 35 years of service and his political legacy to be that of the governor who was drummed out of office because he was a racist.

Yet he had no problem casting his Republican opponent in Virginia’s 2017 gubernatorial race, Ed Gillespie, as a racist without any evidence.

The yearbook photo shocks the sensibilities of so-called woke liberals who bought the narrative that Democrats alone can claim the high moral ground on issues of race and human dignity. The narrative covertly and often overtly paints Republicans as racists.

Every day Northam remains in the governor’s mansion, we see that moral high ground sinking under Democrats’ feet.

Modern-day liberals want to believe in a past where all Democrats were men with the character of Atticus Finch. The truth is far less heroic.

The truth is that throughout the course of time, there has been only one right side. The truth is that in 1801, 1984, and today, our major political parties have stood on the wrong side of the race issue.

The decade or century of the offense does not matter, whether it was our Founding Fathers who themselves saw no moral conflict in owning people, or whether a 25-year-old med student named Ralph Northam found no moral conflict in making light of the role that the Ku Klux Klan had in the execution and dehumanization of blacks.

In 1984, when Northam apparently either was putting on blackface or donning a robe like a member of the KKK, we were working on our first political campaign.

At 12 years old and 11 years old, we worked to elect Rose Strong, a black Republican woman, to the city council in our hometown of Columbus, Georgia.

If liberals learn anything from Northam’s fall from grace, our hope is that it is to throw away the tired old page from their political playbook that encourages them, without thought or evidence, to label all Republicans as racists.

Every Republican is not a racist, and every Democrat is not Atticus Finch.