San Francisco’s Liberal Policies Have Made It a Slum 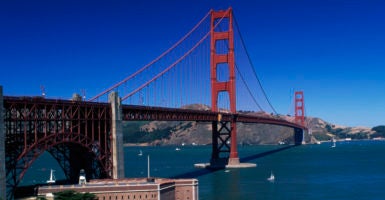 "One urban planner told me, 'I just returned from the Tenderloin [a section of San Francisco]. It's worse than slums of India, Haiti, Africa!'" writes John Stossel. (Photo: DeAgostini/Getty Images)

San Francisco is one of the richest cities it the world. It’s given us music, technology, and elegant architecture.

One urban planner told me, “I just returned from the Tenderloin [a section of San Francisco]. It’s worse than slums of India, Haiti, Africa!”

So I went to San Francisco to make a video about that.

I’ve never seen slums in Africa, but I’ve seen them in Haiti and India.

What I saw in San Francisco looked similar. As one local resident put it, “There’s s— everywhere. It’s just a mess out here.”

There’s also lots of mental illness. One man told us, “Vampires are real. I’m paranoid as hell.” San Francisco authorities mostly leave the mentally ill to fend for themselves on the street.

Other vagrants complain about them. “They make it bad for people like us that hang out with a sign,” one beggar told us.

San Francisco is a pretty good place to “hang out with a sign.” People are rarely arrested for vagrancy, aggressive panhandling, or going to the bathroom in front of people’s homes. In 2015, there were 60,491 complaints to police, but only 125 people were arrested.

Public drug use is generally ignored. One woman told us, “It’s nasty seeing people shoot up—right in front of you. Police don’t do anything about it! They’ll get somebody for drinking a beer but walk right past people using needles.”

Each day in San Francisco, an average of 85 cars are broken into.

“Inside Edition” ran a test to see how long stereo equipment would last in a parked car. Its test car was quickly broken into. Then the camera crew discovered that its own car had been busted into as well.

Some store owners hire private police to protect their stores. But San Francisco’s police union has complained about the competition. Now there are only a dozen private cops left, and street people dominate neighborhoods.

We followed one private cop, who asked street people, “Do you need any type of homeless outreach services?”

Most say no. “They love the freedom of not having to follow the rules,” said the cop.

And San Francisco is generous. It offers street people food stamps, free shelter, train tickets, and $70 a month in cash.

“They’re always offering resources,” one man dressed as Santa told us. “San Francisco’s just a good place to hang out.”

So every week, new people arrive.

Some residents want the city to get tougher with people living on the streets.

“Get them to the point where they have to make a decision between jail and rehab,” one told us. “Other cities do it, but for some reason, San Francisco doesn’t have the political will.”

When Sen. Dianne Feinstein was mayor, she proudly announced that she was putting the homeless in hotels: “A thousand units, right here in the Tenderloin!”

When California Gov. Gavin Newsom was mayor of San Francisco, he bragged, “We have already moved 6,860 human beings.”

But the extra funding hasn’t worked.

One reason is that even if someone did want to get off the street and rent an apartment, there aren’t many available.

San Francisco is filled with two- and three-story buildings, and in most neighborhoods, putting up a taller building is illegal. Even where zoning laws allow it, California regulations make construction so difficult that many builders won’t even try.

For years, developer John Dennis has been trying to convert an old meatpacking plant into an apartment building—but it has taken him four years just to get permission to build.

“And all that time, we’re paying property taxes and paying for maintenance,” says Dennis. “I will do no more projects in San Francisco.”

People in San Francisco often claim to be concerned about helping the poor. But their many laws make life much tougher for the poor.