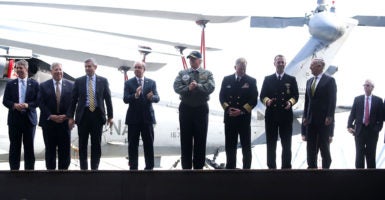 A maintenance backlog that causes mission-critical vessels to face delayed repairs puts the U.S. Navy’s ability to project power globally at risk, and if not addressed soon by Congress and the Defense Department, could leave the Navy dangerously unprepared to meet challenges around the world.

The Navy plays a major role in protecting U.S. strategic interests abroad and provides hard power to back up diplomacy and keep sea routes open. But because of aging facilities and fluctuating worker counts, only 16% of the Navy’s guided-missile destroyer fleet completed scheduled repairs on time last year.

And guided-missile destroyers are high priorities because they can conduct both offensive and defensive missions.

But the lack of readiness is pervasive across the fleet. The Navy’s maintenance backlog grew by 41% from 2012-2017, and the condition of available shipyards continued to deteriorate.

For example, shipyard facilities “now include at least four dozen buildings—comprising 1.2 million square feet of space—that are condemned, uninhabitable, or otherwise unusable for ship repairs or any other work.”

Shockingly, the Navy had only 22 dry docks and sub-tenders in 2019, whereas in 1988 it had immediate access to roughly “50 dry docks, marine railways, and lifts.”

Although the Navy uses both public and private shipyards, it likely will need to lean more on private industry to catch up. In 2018, the Navy put out a call for “dry docks that are either not certified for use by the service or are certified and underutilized,” hoping to find new ways to alleviate the problem.

Currently, only four dry docks are available to service the entire West Coast. A dry dock is a fundamental capability that provides the ability to make repairs to ships that are possible only when the ship is removed from the water.

Deterrence rests on the concept that potential opponents such as China and Russia perceive the U.S. as strong and able to deliver an overwhelming response to any offensive action. As it stands now, the Navy risks losing its ability to deter China in the South and East China Seas as China’s naval component, the People’s Liberation Army Navy, continues to modernize and grow.

Given Iran’s recent hostile acts in the Strait of Hormuz, U.S. naval strength also is necessary to deter and defend against Iranian aggression, such as its recent seizure of tankers.

Some progress has been made. The Navy has established a new position, the deputy assistant secretary for sustainment, to help ships move through their maintenance cycles more smoothly.

Naval Sea Systems Command increased the number of destroyers finishing their repairs on time to as much as 40% in 2019.

But consistent staffing remains a problem.

The Navy has a troublesome practice of awarding contracts too close to the actual start of construction, leaving companies and their personnel unprepared to hit the ground running. To alleviate this issue, it has begun awarding contracts as many as 120 days ahead of time to allow businesses to prepare.

Even with small improvements and increased attention, more must be done, and quickly. The Pentagon and policymakers must make the maintenance of our sea vessels a priority, or they risk jeopardizing the Navy’s ability to protect our interests.