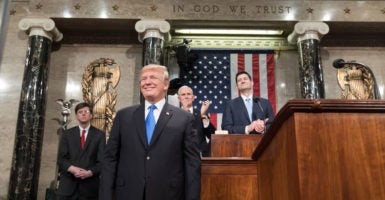 President Trump's guests for the State of the Union address include a middle schooler, Joshua Trump, who has been bullied. (Photo: Shealah Craighead/Getty Images)

President Donald Trump will put personal faces on the many policy issues his administration has been tackling this year with the guests he’s invited to his second State of the Union address Tuesday. Below is a list of the guests and their stories, drawing upon the information the White House provided.


Debra Bissell, Heather Armstrong, and Madison Armstrong are three family members of Gerald and Sharon David who were allegedly murdered by an illegal immigrant in their Nevada home. Debra, Heather, and Madison are the Davids’ daughter, granddaughter, and great-granddaughter, respectively.

One of Trump’s bipartisan victories from the past year is the First Step Act, which was signed into law in December 2018. Since then, former inmate Matthew Charles was released from prison as a result of the new reform. At the center of Charles’ rehabilitation in prison from a life of selling crack cocaine and committing other related offenses was God and education. He completed 30 Bible studies. He also “became a law clerk, taught GED classes and mentored fellow inmates,” according to the White House.

Alice Johnson had been sentenced to life in prison without parole for a nonviolent drug case. While she was incarcerated for 22 years, she had an “extraordinary rehabilitation,” per the White House, and Trump granted her clemency on June 6, 2018.

Ashley Evans is a mother who will be celebrating one year and one month of sobriety from opiod abuse on Feb. 9. When Evans was pregnant in 2017, she relapsed. But with the help of Brigid’s Path, a medical care facility in Kettering, Ohio, Evans is doing better and will soon be living with her daughter full time.

Elvin Hernandez is a special agent with the Trafficking in Persons Unit of the Department of Homeland Security. Hernandez has served in federal law enforcement for 18 years investigating narcotics, gangs, and human trafficking, with an impressive track record of successful international human trafficking investigations targeting transnational organized crime groups.

Timothy Matson, a Pittsburgh SWAT team member, was a responder to the October 2018 Tree of Life synagogue massacre. Matson, who suffered multiple gunshot wounds, saved many lives in the attack.

Judah Samet is a survivor of the Holocaust and the Tree of Life synagogue massacre. He immigrated to Israel after the war. He eventually immigrated to the United States in the 1960s after serving as a paratrooper and radioman in the Israel Defense Forces.

Tom Wibberley is the father of Navy Seaman Craig Wibberley, who lost his life on the USS Cole on Oct. 12, 2000, because of a terrorist attack. Craig, who was killed at age 19, was distinguished for his service on the USS Cole and was accepted into the Information Technician School. In honor of his tragic death, a $1,000 scholarship is given each year to four students studying his former passion of computer science.

Cancer survivor Grace Eline was diagnosed with a germ cell brain tumor called germinoma at age 9, and began treatment in May 2018. Grace is described as a bright presence, who “stayed positive and strong, making the rounds in the hospital, cheering up other patients, and always having a smile for the many caring medical professionals who treated her.” Today, Grace shows no evidence of cancer and plans to help other children fighting cancer.

As part of first lady Melania Trump’s “Be Best” campaign, her guest will be Joshua Trump, a sixth-grade student from Wilmington, Delaware, who has been bullied in school because of his last name. Joshua’s Uncle Cody, who serves in the United States Air Force, is his hero and best friend.