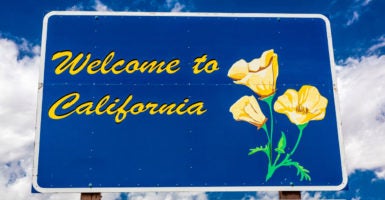 Americans should be thankful for federalism.

Not only does this aspect of our Constitution allow states and localities to find the right mix of laws and policies that fit their needs, but it is often an essential barrier to the nuttiness of their neighbors.

On that front, California is Exhibit A.

Some of its new laws this year demonstrate just how far left the Golden State has gone. Some are merely obnoxious, others likely unconstitutional, but one thing is for sure—with complete Democrat control of the Legislature and Gavin Newsom in the governor’s mansion, more such laws undoubtedly are on the way.

California, like a growing number of cities and states around the country, bought into a bogus study from a 9-year-old boy and decided to restrict use of plastic straws. California restaurants are now required to ask customers if they want straws before giving them out.

The whole initiative amounts to little more than environmentalist virtue-signaling, as some activists have admitted, but it could certainly have real consequences for businesses and customers.

The penalty for failing to comply with the law is a fine of up to $300, a fairly moderate penalty compared to some California cities.

Santa Barbara, according to the Washington Examiner, threatens repeat offenders under a similar law with a $1,000 fine and potential jail time.

2. Women on Corporate Boards, or Else

Companies located in California now have to include at least one woman on their corporate boards by the end of 2019. The law requires two women if the board has five members and three if it has over seven.

California is the first state to create such a law, but it mirrors ones tried in Europe.

Laying aside the likely unconstitutional intrusion into the private decisions of American businesses, evidence from similar European legislation shows that the laws mostly fail to help women in general, as well as unleash other unintended consequences.

In Norway, companies found ways to dodge a law passed in 2006.

“The number of public limited firms in Norway by 2009 was less than 70 percent of the number in 2001, according to the study, while the number of privately held firms not subject to the gender quotas jumped by more than 30 percent,” The Washington Times reported.

Companies left, stock prices dropped, and women were no more likely to get jobs lower in the corporate hierarchy.

There was little evidence that the law actually made businesses “better,” as proponents proclaim.

California certainly comes up short when it comes to school choice. Unfortunately, a new law known as AB-2601 actively takes the movement backward.

The measure forces publicly funded but privately run charter schools to use the same sex education standards as public schools.

This doubles down on the one-size-fits-all standards that have led to failure for public schools to begin with. Worse, it imposes the kind of social engineering that prompts many parents to pull their children out of public schools.

As Inez Stepman, my wife, wrote for The Daily Caller:

Regardless of where you fall on what sex education is appropriate for children, parents ought to be in the driving seat when their kids confront these sensitive issues. Instead, progressive activists in California have managed to extend their dominion beyond the traditional public schools, and into charters.

Besides the obvious problem of mandated left-wing social engineering, it’s just bad policy to slap regulations on programs meant to be an alternative to public schools.

In addition to the problem of the state’s forcing an agenda on charter schools—in part defeating the point of school choice—a study by education experts Lindsey Burke, Corey DeAngelis, and Patrick Wolf shows that regulations on private school choice programs have had a detrimental effect on the programs (including lower enrollment and participation from higher performing schools).

California joined a growing list of states to embrace “nonbinary” driver’s licenses. That means there are now three options to choose from, instead of just male and female.

Under legislation known as SB 179, those who want to choose the third option for their licenses can request gender “X” in the place of the traditional “M” or “F.”

“When your ID doesn’t match your gender identity or expression, it can expose you to potentially dangerous situations,” said Rick Zbur, the executive director of Equality California. “SB 179 eliminates unnecessary obstacles from the process of getting state-issued identification documents for thousands of Californians.”

Similar policies exist in Maine, Oregon, Colorado, and the District of Columbia.

5. War on Right to Bear Arms

California has some of the most restrictionist gun laws in the country, and more are on the way.

Despite little evidence of effectiveness, the state has doubled down on its curtailment of the right to bear arms.

It’s now nearly impossible for a Californian under the age of 21 to buy a gun.

The state already restricted handgun purchases to those age 21 or older, but a new law signed by former Gov. Jerry Brown extends this policy to weapons such as rifles and shotguns.

House Democrats have advocated similar laws at the federal level—a good demonstration of how bad ideas start in California and spread to the rest of the country.

“Gov. Brown just told millions of people under 21 that they can fight and die for our state and country with machine guns, but they can’t buy a gun for self-defense in their homes,” said Craig DeLuz, a spokesman for the Firearms Policy Coalition, a gun rights advocacy group. “That’s nuts.”

So, a 20-year-old effectively can’t buy a gun, but, according to legislation passed in 2018 (to take effect in 2020), a 12-year-old can receive taxpayer-funded—and potentially irreversible—gender-transitioning treatment without parental consent.