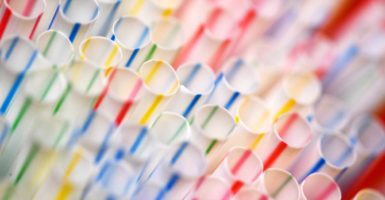 The anti-straw movement has come to the nation’s capital.

The District of Columbia recently passed legislation that would enforce a ban on plastic straws, among several other similar utensils.

The law is set to take effect on Jan. 1, with enforcement mechanisms—such as hefty fines—being implemented in July. As Tristan Justice reported in The Daily Signal, the ban extends not just to restaurants, but to bars, churches, and day cares as well.

As the anti-straw crusade appears to gain steam, it’s worth stopping for a moment to examine why such a seemingly trivial matter has become such a big deal.

The movement began in earnest in Seattle back in 2008, when it became the first major city to create a plastic straw ban. That ban went into full effect this year, and similar bans have since been popping up across the U.S.

One issue with the anti-straw movement is that it has magnified the straw problem beyond reality. While there is a general issue with plastic buildup in the ocean, just a tiny amount of it is composed of straws.

According to one study, straws make up only 2,000 tons of the 9 million tons of plastic waste that hit the oceans every year.

And most of the garbage that ends up in the ocean doesn’t even come from the United States. China and a few Asian countries are the main source of plastic waste polluting the oceans.

Unfortunately, there have been some suspect statistics floating around the internet, including one that claims Americans use 500 million straws a day. But this number came from an informal phone survey of a 9-year-old boy-turned-activist, according to a report by Reason.

Angela Logomasini, a researcher at the Competitive Enterprise Institute, a pro-free market nonprofit, said that while plastic buildup in waterways and oceans is a problem, it’s not one that will be affected by straw bans.

“The problem is a disposal problem,” Logomasini said, according to The Washington Times. “Most of it is in Asia and Africa because they have open dumps and they pour tons of trash into the ocean. They don’t have the proper disposal methods. If you dispose of something properly, it’s not a problem.”

Given the lack of evidence that the world will soon be covered in straws or that straw bans will make a dent in the more serious problem of plastic waste in the ocean, why is this movement still a priority for progressive activists?

Progressive website Vox.com admitted: “Banning plastic straws won’t save the ocean. But we should do it anyway.”

“Our straw campaign is not really about straws,” said Dune Ives, the executive director of Lonely Whale, a pro-straw ban organization, according to Vox. “It’s about pointing out how prevalent single-use plastics are in our lives, putting up a mirror to hold us accountable. We’ve all been asleep at the wheel.”

This is quite revealing. A leader of the movement has admitted that it’s not really about finding practical solutions to real problems.

Washington, D.C.’s plastic straw ban, like all of the various other straw bans, amounts to little more than a progressive piety project of little utility and much inconvenience.

Progressives are quick to use the blunt instrument of the state to try to solve the world’s problems, no matter how serious or trivial.

But as John-Michael Seibler, a Heritage Foundation fellow in legal studies, wrote, there are more reasonable ways to reduce plastic waste than by passing blanket bans and heavy fines for straw usage.

This can include working with local volunteers and businesses to clean up waste and promote it as a public issue, or simply enforcing strict littering laws that already exist in many cities.
Seibler noted the way New York City dealt with litter on the subway:

So instead of punishing everyone—in particular disabled people who need straws to drink—with a blanket ban, it seems reasonable for local governments to find less intrusive methods of fixing what is ultimately not a huge problem.