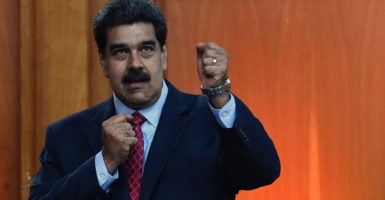 The current crisis in Venezuela is having little impact on global markets. In fact, going forward, there is really little downside economic risk.

A huge upside potential exists, however, if the U.S.-led coalition of countries and—more importantly—the Venezuelans themselves are able to exert enough peaceful and nonviolent pressure to force Nicolás Maduro to end his brutal dictatorship and relinquish power.

This would enable the interim president, Juan Guaidó, to begin the long process of restoring market democracy.

The Maduro regime is clinging to power, still backed by Venezuela’s generals, and the nation’s people are suffering. The terrible extent of this suffering is made crystal clear in The Heritage Foundation’s 25th annual Index of Economic Freedom.

Again this year, Venezuela is at the very bottom of the index’s rankings—in the “repressed” category. The only country in the world with less economic freedom today is North Korea.

Venezuela has been at the bottom of the index’s rankings for more than 15 years, reflecting the failure of Hugo Chávez’s Latin American socialism. Other economic data also vividly illustrate this epic fail.

For example, when Chavez took power in 1999, Venezuela’s state-owned oil company, PDVSA, was producing 3.5 million barrels per day. Today, production is down dramatically.

While the Maduro regime claims it is producing 1.3 million barrels per day, independent analysts believe that figure is much lower. The ruination of PDVSA wrought by Chávez and Maduro is perhaps the most dramatic example of the disastrous effects of their policies.

Ironically, though, the trickle of oil produced by Venezuela in the midst of a global oil glut has helped to minimize the effects of the Maduro crisis. World oil prices climbed only slightly in recent days.

International capital markets likewise have been little affected, a fact reflected by relatively unchanged credit spreads in the region. PDVSA’s bonds used to be a mainstay among global investors, but today the relatively few still held have been deeply discounted.

If and when Maduro transitions from power, an initial market surge based on a flush of positive sentiment likely will result.

Of course, given the near-complete destruction of Venezuela’s economy over the last two decades, the post-Chavista era also will be marked by many years of painful rebuilding.