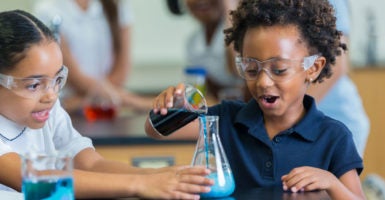 The capacity for education choice to be life-changing for families is at the heart of its incredible growth in the states. (Photo: Steve Debenport/Getty Images)

How your children are educated is probably one of the most important decisions that parents can make. That is why the choice should rest with them and them alone.

That’s what National School Choice Week is all about: celebrating policies that put parents where they belong—in the driver’s seat.

Case in point: the D.C. Opportunity Scholarship Program. For the last 15 years, it’s been an education lifeline for children from low-income families in the nation’s capital.

The D.C. OSP, which provides vouchers to qualifying families, has enabled nearly 11,000 children to find a safe and effective private school that meets their needs. It’s helping some of the most vulnerable children in the District, who come from families with average annual incomes just over $23,000.

The program didn’t just happen. Visionary leaders in Congress such as Rep. Dick Armey, a Texas Republican, and parental education choice advocates such as Virginia Walden Ford fought early and hard for the D.C. OSP.

It was a personal issue for Virginia. She saw her son, William, who was having a tough time in a traditional public school, getting pulled into a bad crowd. Access to a private scholarship from a neighbor who wanted to help, she says, made all the difference in the world.

As she relates in The Heritage Foundation documentary “Let Me Rise”: “William was able to attend a school that I chose, that was in his best interest. In a couple of months I saw this child being a child who hated to go to school, [who] was failing everything, to this kid [who] was just totally engaged in learning. And when I asked him why, he said that for the first time in his educational experience, he felt like people really cared about whether he learned or not.”

The transformation in her son, Virginia says, was “almost magical.”

She then worked tirelessly to bring the same opportunity to children throughout the District. And in 2004, the first students began receiving OSP scholarships.

Congress established the D.C. Opportunity Scholarship Program in part due to widespread concern over how poorly the District’s public schools were performing. In 2002, just 10 percent of fourth-graders and 9 percent of eighth-graders in D.C. public schools were proficient in reading, according to the National Assessment of Educational Progress. Low achievement levels, coupled with high dropout rates and concerns over school safety, catalyzed reform.

Several years after the D.C. OSP was established, professor Patrick Wolf of the University of Arkansas led a congressionally mandated evaluation of the program. He found statistically significant increases in graduation rates for students using a voucher to attend a private school of choice. Wolf’s team found that the use of vouchers in the D.C. OSP increased graduation rates by 21 percentage points.

School choice is cost-efficient, too. It’s improving education in a way that large-scale federal education programs—on which American taxpayers have spent some $2 trillion over the past half-century at the federal level alone—never have.

The capacity for education choice to be life-changing for families is at the heart of its incredible growth in the states. In 2000, for example, just four school choice programs were in operation in the United States. Today, there are 63 programs supporting private school choice in 29 states and the District of Columbia (26 voucher programs operating in 15 states; 23 tax-credit scholarship programs in 18 states; and five education savings account programs in five states).

It’s time for Congress to be just as visionary now as it was when it established the D.C. Opportunity Scholarship Program—and expand school choice in the nation’s capital to all children who live there.

School choice was a lifeline for Virginia Walden Ford and her family. There is little doubt that the other 11,000 children who received an opportunity scholarship would say the same.

Let’s make it our goal this National School Choice Week to expand educational opportunity to more families—and give ourselves even more to celebrate next year.