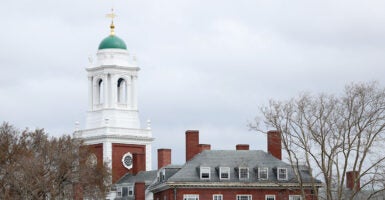 An “editorial editor” for The Harvard Crimson is demanding that two instructors be fired for offenses against the new racial norms animating the woke left. Pictured: The Harvard University campus is shown on March 23 in Cambridge, Massachusetts. (Photo: Maddie Meyer/Getty Images)

Daniel J. Mahoney holds the Augustine Chair in Distinguished Scholarship at Assumption University. For the 2020-2021 academic year, he is a visiting fellow in Princeton University's James Madison Program.

American liberals once prided themselves on their fidelity to the First Amendment. Indeed, they had an expansive understanding of it. They defended unpopular speech and even the most provocative examples of “freedom of expression.”

One could question their hesitation to set limits in these areas, but there was something admirable about their principled defense of the free exchange of ideas.

This kind of liberalism, however, is in massive retreat today and is barely present on our college and university campuses. Instead, the forces of ideological correctness demand intellectual and even political conformity and seek out dissenting voices to humiliate and silence.

Two recent examples from Harvard University and Middlebury College illustrate the illiberalism that has become ascendant on many campuses and in many of our cultural institutions. The responses to these incidents, however, provide some grounds for hope.

The case of one of them, Diana J. Schaub, is best known to me. I have admired her writings and thoughtful presence in the conservative intellectual community going on 35 years now. She is also a friend.

Schaub is a political theorist who has written gracefully and profoundly on the political thought of Montesquieu, the liberal French philosopher who was an inspiration for the federalism and separation of powers championed by the authors of the Federalist Papers. Her work also includes deeply thoughtful expositions of African American political thinkers.

In a number of well-crafted essays and reviews, she has assessed the writings of Frederick Douglass, Booker T. Washington, W.E.B. Du Bois, Martin Luther King, and Malcolm X with the sympathy and critical respect they deserve. Schaub sees African American thought as integral to the larger American experience.

This crucial set of voices contributing to the ongoing civic reflection on what it means to be an American is far from monolithic. For example, Douglass provides a model of freedom and character “wrested and won,” in Schaub’s words, not merely received at the sufferance of a dominant white race.

He was also opposed to excessive race-consciousness, to a false “racial pride,” and, in Schaub’s words from an essay in The Public Interest, he “had faith in the capacity of blacks and whites alike to defeat prejudice, thereby becoming indifferent to the difference of race.”

No one believed more than Douglass in the agency of free men and women, black and white, to make something of themselves in a free political order. This is a model that deserves a hearing today. Neither Douglass nor those who study him should be silenced for expressing such views.

Alas, the censorious new Jacobins castigate Douglass’ position as racist and supportive of white supremacy. Their hubris is appalling.

Schaub’s writings on race and America convey, very much in the spirit of the figures she writes about, a message of hope, responsibility, civic and moral equality, and openness to human excellence in all its forms.

In contrast, the new totalitarians offer resentment, grievance, hate, and the demonization of anyone who might have something to teach them. The difference could not be more striking. One is the path of common humanity and common citizenship, the other of perpetual enmity and denunciation.

So where does Schaub’s fault lie, according to her accuser, government major Joshua Conde? Cherry-picking passages from Schaub’s acute and sensitive analyses and offering them as though they revealed a tainted mind and soul, Conde calls her words “ignorant, and deeply concerning,” if not “outright bigoted.”

His principal “evidence” is a snippet from a splendid article, “America at Bat” from National Affairs (Winter 2010), which in passing laments the decline of black interest and participation in baseball, our once national sport.

Writing from personal as well as common experience, Schaub notes that “the experience of things baseball is a legacy from fathers to sons (and sometimes daughters).”

She then offers, in an admittedly speculative aside, her “strong hunch” that “the declining interest and involvement in baseball is a consequence of the absence of fathers in the black community,” since “80% of African-American children are raised without a father in the home.”

There is nothing intrinsically “ignorant” or racist about this documented fact, nor in bringing it into the discussion, which she does with manifest regret. If it is verboten to mention such disturbing realities, then our civic and intellectual life will suffer terribly.

Ignoring such facts and silencing those who bring them to bear in a relevant manner upon problems of common concern is the antithesis of healthy intellectual and civic life.

Fortunately, Harvard University has made no move to act upon Conde’s demand. Conde, a very young man (class of ’22), further demanded that Harvard abstain from hiring others “with similar unacceptable views.”

This is not the voice of genuine liberalism or the search for truth. It is peremptory, coercive, and committed to closing off discussions before they begin. Conde tells us that he doesn’t want to feel “uncomfortable.”

But the disinterested pursuit of truth, liberal inquiry, and civic debate itself will at times make us feel uncomfortable. That is all to the good.

This incident at Harvard is not the only recent attack on these core liberal values. At Middlebury College, over 600 students signed an “Open Letter” opposing an event sponsored by the Alexander Hamilton Forum in which two distinguished scholars, Leslie Harris and Lucas Morel, were to debate whether slavery was the core of the American founding, as the advocates of The New York Times’ 1619 Project insist.

The protesting students declared that such a question “should not be up for debate,” and Morel, himself a Hispanic of black Dominican descent, was denounced by some as a “white supremacist,” of all things.

This despite an exemplary scholarly record of defending racial justice and the principle of human equality articulated so eloquently by Abraham Lincoln and embedded in the Declaration of Independence, that “great promissory note” of which Martin Luther King spoke at the Lincoln Memorial in August 1963.

We are in dangerous times when the Great Emancipator is conflated by today’s “know-nothings” with the Grand Wizard of the Ku Klux Klan. Fortunately, the debate proceeded as scheduled on Oct. 1, with more than 250 students attending by Zoom (including 40 protesters).

These appalling incidents join many others of the same ilk. Together, they are portents of an illiberal future that will inexorably come if we do nothing to stop it. The results of these two recent cases suggest, however, that the new totalitarianism will abate only when it meets principled and firm resistance.