The Mob Goes After Abraham Lincoln 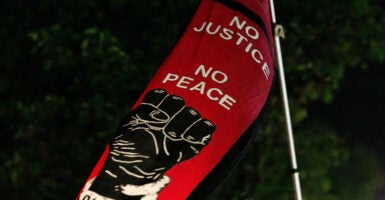 It makes a powerful symbolic statement of our country’s demise when an Abraham Lincoln statue is facedown in the mud and no one pays any consequences. Pictured: Demonstrators protesting police violence and racial injustice march to the Police Association building in Portland, Oregon, Sept. 4, on the 100th consecutive day of protests in the city. (Photo: John Rudoff/Anadolu Agency/Getty Images)

Edward Achorn, an award-winning journalist, is the author of the new book "Every Drop of Blood: The Momentous Second Inauguration of Abraham Lincoln."

Abraham Lincoln’s statues dot the landscape for a reason that is well-understood: He is a symbol of wisdom, decency, sacrifice, and perseverance in defeating slavery and liberating millions of black Americans.

Antifa rioters knocked down his statue in Portland during a self-proclaimed “Day of Rage” on the eve of Columbus Day.

They also trashed the Oregon Historical Society, which preserves treasures of the past so that people of succeeding generations may understand their culture and history.

Citizen journalist Andy Ngo quoted one rioter as the mob pulled down a statue of Theodore Roosevelt: “F— all you colonizers! … Everyone of you that’s against Black Lives Matter can f— the f— off.”

Such ugly and hateful scenes continue, month after month. Local officials continue to enjoy fame, power, and money without having to meet their most basic responsibility of protecting the public.

The Portland public seems indifferent to this, and even the federal government—which in the past has enforced Americans’ civil rights when local authorities refused to do so—seems like a flabby and impotent giant.

When Antifa and its radical associate Black Lives Matter began their campaign of hatred and violence months ago, the news media helped sell the movement as “mostly peaceful” and devoted to ending endemic racism in law enforcement, an object virtually all Americans could support.

But, of course, it soon became clear the movement was divorced from peace and reason. The details of altercations between police and the public that might tend to exonerate officers, or at least put their actions in context, were not promulgated. The movement advanced violence, rather than the peaceful means we have, under our rule of law, of holding police accountable.

Burning black businesses and killing black Americans, as anyone with an ounce of common sense could discern, did nothing to advance the professed cause. The movement promoted defunding the police, a means of subjecting citizens to the violence and terror of the mob.

Many good and caring people have marched for racial justice. But the movement—at its core—was not about holding police accountable.

It was about tearing down America, its freedoms, and the foundational rule of law that protects people’s civil rights. It was about assaulting America’s founding and the statues that honor those who created and sustained this country. A country that, as Lincoln put it, is the last, best hope of mankind.

George Orwell wrote about this approach in his brilliant and chilling analysis of totalitarianism, the novel “1984”:

Every record has been destroyed or falsified, every book rewritten, every picture has been repainted, every statue and street building has been renamed, every date has been altered. And the process is continuing day by day and minute by minute. History has stopped. Nothing exists except an endless present in which the Party is always right.

President Donald Trump tweeted on Monday morning, “The FBI and Law Enforcement must focus their energy on ANTIFA and the Radical Left, those who have spent the summer trying to burn down poorly run Democrat Cities throughout the USA!”

But he has mouthed such words for months, and the violence and destruction proceed apace, no doubt fueling outrage in many voters.

Perhaps the most unsettling thing about this year of COVID-19 and rioting is the way the Constitution and the rule of law have been laid aside, at the encouragement of many politicians and with the willing acceptance of the public.

Lincoln, a lifelong advocate of the rule of law, waged a gruesome war to preserve this nation. It makes a powerful symbolic statement of our country’s demise when his statue is facedown in the mud—and no one pays any consequences for such violent destruction.