The Left’s Willingness to Tolerate Violence Should Frighten All Americans 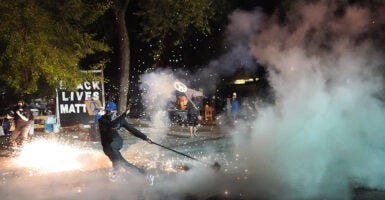 A protester flees as a flashing grenade explodes behind him during a protest against racial injustice and police brutality in front of the Mark O. Hatfield U.S. Courthouse in the early hours of July 30, 2020, in Portland, Oregon. (Photo: Nathan Howard /Stringer/Getty Images)

So goes the characterization of demonstrations that have routinely turned into looting and rioting for months on end, from Portland to Seattle to New York to Los Angeles.

“Protesters in California set fire to a courthouse, damaged a police station and assaulted officers after a peaceful demonstration intensified,” read one recent ABC News tweet. CNN called protests in Portland “mostly peaceful,” adding that “they have at times devolved into violence, vandalism, and arson.”

During riots in Los Angeles in June, as the entire county locked down, the Los Angeles Times noted, “The third night of countywide curfews followed days of massive, mostly peaceful protests … Nearly 1,200 people were arrested Sunday after police officers clashed with demonstrators and looters shattered windows and emptied stores in Santa Monica and Long Beach.”

The phrase “mostly peaceful,” then, is rather fungible. Consider that during the tea party protests of 2011, then-Vice President Joe Biden reportedly likened tea partiers to “terrorists”—and those protests were notable mostly for people cleaning up their own litter.

When anti-lockdown protesters descended on the Michigan State Capitol, a columnist for The New York Times labeled them “armed rebels,” despite a complete lack of violence.

When three white supremacists were arrested for plotting violence at a pro-gun rally, GQ’s Talia Lavin headlined, “That Pro-Gun Rally in Virginia Wasn’t Exactly ‘Peaceful'”—even though the rally saw no violence.

In truth, the category of “mostly peaceful” is a brand-new invention meant to obscure the simple fact that many of our cultural elites are fine with violence so long as those who engage in such violence have the proper goals.

Nikole Hannah-Jones, creator of the pseudo-historical 1619 Project, celebrated when critics labeled rioting and looting “the 1619 riots”; she added that destruction of property was “not violence.”

This week, Democrats grilling Attorney General William Barr could not be bothered to condemn violence, prompting Barr to rant, “What makes me concerned for the country is this is the first time in my memory the leaders of one of our great two political parties, the Democratic Party, are not coming out and condemning mob violence and the attack on federal courts.”

This should come as little surprise, given that those same cultural elites have cheered on massive protests in a time of a deadly pandemic, explaining that sometimes politics is just too important to stop a raging disease.

Our journey back to the 1960s is nearly complete. Too many Americans have rejected some of the key lessons of that time—that a breakdown in law and order costs lives, that political change does not require violence—in favor of a newfound sense of purpose. These Americans will pat the violent vanguard of revolution on the head, content that they will not pay the price, all the while maintaining that those who crave law and order stand for regressive autocracy.

With Democrats and those in the media willing to run cover for violent leftists, the thin veneer of civilization disintegrates. When violence is excused as speech and speech by the opposition labeled violence, democracies die.

With each passing day of silence by those who should know better—or worse, those propagandizing on behalf of those who engage in criminal activity—America draws closer to the brink.