I’m a Single Mom From the City. School Choice Has Changed My Kids’ Lives Forever. 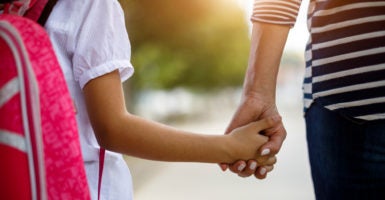 "Seeing what this program has done to change the lives of so many families has made every tough moment worthwhile," writes Virginia Walden Ford. (Photo: damircudic/Getty Images)

Fifteen years ago, I found myself feeling hopeless and helpless in the nation’s capital.

My children’s school situation was dismal. My older kids were academically driven, yet faced a steady stream of challenges. My youngest seemed completely overwhelmed and destined for failure.

And when I looked around my neighborhood, I saw the same dismal situation playing out with my neighbors’ kids.

That was in 2004, just as Washington, D.C., was about to implement its Opportunity Scholarship Program. Although my son was awarded a scholarship from a neighbor, it was that action that pushed me to fight for all kids in D.C. to have the same choices.

Fifteen years later, fellow parents and I have witnessed a sea change in our kids’ education, with more than 10,000 scholarships awarded to attend private schools. These scholarships have helped deserving low-income kids escape to a school that will put them on track to a bright future.

With D.C. being under Congress’ jurisdiction, it was Congress that passed this school choice program.

It took D.C. parents years of advocating for their children before Congress responded. In 2003, Congress passed the D.C. Parental Choice Incentive Act, which President George W. Bush signed into law on Jan. 23, 2004.

Seeing the results in the lives of children has been so wonderful. I have watched children who received scholarships thrive in the schools that they and their parents chose. I’ve seen them graduate and go on to attend college, and then graduate there.

These are the same kids that many thought would never be successful. They are now holding good jobs and contributing to society in so many positive ways.

As we celebrate the 15th anniversary of this incredible program, my heart and my spirits are continually raised. I often run into families who have benefited and get an update on how their children are doing, and it always makes me proud.

As difficult as it was for us during the initial fight, and even afterward, seeing what this program has done to change the lives of so many families has made every tough moment worthwhile.

So many people didn’t think a ragtag group of low-income parents could effectively fight to ensure our kids the best education possible. But we knew differently. We knew that if we raised our voices, we could win for our children.

We did. And now our kids are winning as a result.