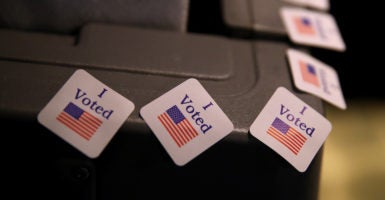 In a small town such as Gordon, Alabama, it doesn’t take many forged or fraudulent ballots to swing the outcome. These stickers decorate a voting machine in Alabama on Dec. 12, 2017. (Photo: Justin Sullivan/Getty Images)

The mayor of Gordon, Alabama, was removed from office last week after a jury found him guilty on two felony counts of absentee ballot fraud. Both he and his one-time constituents are learning firsthand the high price of voter fraud.

Of course, to hear many on the left tell the story, voter fraud isn’t real. They say fraud is just a myth designed by conservatives to suppress liberal voters. On the rare occasion that they acknowledge that voter fraud exists, they claim it is “vanishingly rare” and entirely insignificant.

Tell that to the residents of Gordon.

Their faith in the sanctity of the town’s electoral process may be diminished, and who could blame them? After all, the now former mayor, Elbert Melton, was willing to cheat to win.

And in a small town of several hundred residents such as Gordon, it doesn’t take many forged or fraudulent ballots to swing the outcome. Indeed, Melton “won” his last election by a scant 16 votes.

Now, the town must deal with the political fallout of this scandal, and bear the financial burden of a special election for a new mayor. Are these developments inconsequential? Hardly.

Melton notarized several absentee ballots while no witnesses were present—ballots that voters had not signed in his presence. Alabama’s election code requires that at least two witnesses be present, and prohibits agents from signing on behalf of the voter.

Multiple election forms that require a notary explicitly state that the signature is to be made in public. And, of course, the purpose of notarizing documents in the first place is to guarantee that the person signing them is who he says he is.

It took the jury only 45 minutes to hand down a guilty verdict for Melton. Alabama law requires that officeholders be removed following felony convictions; the town council will appoint an interim mayor until a new election can be called.

Absentee ballot fraud may be part of an identifiable pattern of misconduct for Melton. After he took office, Melton locked city council members out of city hall. And he still faces an unrelated criminal charge of second-degree theft for allegedly taking $1,700 in public funds to purchase a used police vehicle for his son.

Melton’s conviction for voter fraud comes as a reminder that even seemingly small-scale voter fraud can have profound consequences for communities, and that politicians—regardless of party affiliation—are not above taking advantage of vulnerabilities in the electoral system to advance their own careers.

The Heritage Foundation tracks such cases in its publicly accessible voter fraud database, which as of today contains 1,177 proven instances of fraud drawn from nearly every state. Most of these entries—1,019 in all—resulted in criminal convictions against fraudsters.

In 2015, Olivia Lee Reynolds was convicted of falsely filling out absentee ballots on behalf of her boyfriend, Dothan City Commissioner Amos Newsome. Newsome won by a mere 14 votes, and owed his victory in large part to winning 96 percent of absentee ballots. He faced a legal challenge from his opponent, who ultimately dropped the case, and Newsome himself lost re-election in 2017.

In 2014, Ruth Robinson, mayor of Martin, Kentucky, was convicted along with her husband and son on charges of vote-buying and civil rights violations. Prosecutors said Robinson intimidated poor and disabled citizens by threatening them with eviction unless they filled out a ballot for Robinson under her supervision.

It is difficult to comprehend why so many activists on the left discount the significance of voter fraud and continue to resist reasonable election integrity measures, in light of these and other examples of flagrant violations of election law.

Fortunately, the American people disagree. According to a recent poll, 76 percent say they agree that voters should be required to show ID to vote—a remarkable consensus in light of our hyperpolarized age.

Clearly, citizens want secure elections, and public officials have an obligation to meet that demand. Jurisdictions should adopt strong voter ID requirements, address the vulnerabilities in absentee balloting, and clean up and better maintain voter rolls that are riddled with inaccuracies.

These policy reforms will help to protect the rights of all lawful voters, safeguard elections against fraud, and better enable the detection of misconduct when it occurs.

Prosecutors also should prioritize these cases. To be sure, prosecutors face the challenge of allocating scarce resources, but officials only encourage future infractions when election violations go uninvestigated and fraudsters go unpunished.

Safe and secure elections are at the very heart of American democracy. Voters deserve an outcome they can trust and a process in which they can take pride—both of which begin with securing our election systems.