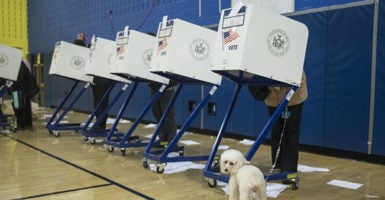 A voter casts a ballot during the midterm elections in November 2018 at the High School of Art and Design polling station in Manhattan, New York City. (Photo: Atilgan Ozdil/Anadolu Agency/Getty Images)

A Michigan municipal election official being charged with six felonies in the discarding of nearly 200 votes is not likely an indication of voting problems nationally, election experts say. But an election integrity watchdog still wants to get to the bottom of the matter.

“Whether it changed the outcome is not really an issue when you are talking about civil rights. What does matter is canceling votes,” J. Christian Adams, president of the Public Interest Legal Foundation, told The Daily Signal. “The Justice Department needs to carefully scrutinize what votes were canceled and why she would have improperly discarded those 193 [votes].”

This type of election fraud is not likely widespread, because it was fairly simple to unravel, Adams said.

“This was caught because the votes cast did not equal the ballot tallies,” Adams said.

In May, at the Michigan Democratic Party’s Legacy Dinner, the party gave Hawkins its Dingell-Levin Award. The award is named for two former longtime Democratic members of Congress.

There are “only two possibilities,” Adams said. “Either this Michigan city had an incompetent election official, or two, she didn’t like those 193 voters for some reason and decided to cancel them out.”

Michigan state officials said all votes were ultimately counted and that no election results were altered.

Most jurisdictions have safeguards in place to prevent this type of fraud by election officials, said Susannah Goodman, director of the election security program at Common Cause, a government watchdog group.

“You don’t see [election official fraud] very often,” Goodman told The Daily Signal. “If a person knows how the system works, they know they will be caught. Reconciliation is pretty basic. If someone is a sophisticated fraudster, why would they do the one thing they should know will be checked and cross-checked?”

Since 2013, there have been three criminal convictions of election officials trying to alter vote counts, according to The Heritage Foundation’s voter fraud database.

A Miami-Dade County, Florida, elections department official pleaded guilty to filling out the mail-in ballots of other voters in favor of a Republican mayoral candidate in the November 2016 election. An Canton, Mississippi, elections committee member was convicted in 2013 of stealing a ballot box. A Clackamas County, Oregon, election official pleaded guilty to altering a ballot in 2013.

In 2007, the Justice Department brought a civil penalty against Ike Brown, a former superintendent of Democratic primary elections in Noxubee County, Mississippi, for manipulating ballots for race-based reasons.

“The kind of post-election audit we are pushing for has to do with vote tabulation and providing a statistically significant number of paper ballots for the audit to limit the risk of electing the wrong person,” said Common Cause’s Goodman.

The city of Southfield, a suburb of Detroit, put Hawkins on administrative leave after her Sept. 23 arrest.

“The City does not have all of the facts at this time, and there will be no rush to judgment,” said a public statement released by city spokesman Michael Manion. “The City will also be conducting a thorough internal investigation and review of these charges. After the City has examined the underlying facts of this matter, we will explore all appropriate and legal avenues to protect the voting process and rights of the Southfield citizenry. Mrs. Hawkins will be on administrative leave with pay at this time.”

“If they submitted a [Freedom of Information Act] request, we will be responding,” she told The Daily Signal regarding the Public Interest Legal Foundation’s records request.

Adams, of the Public Interest Legal Foundation, said actions occurred that, had they not been corrected, would have meant votes didn’t count. So, he said, it’s puzzling that groups that typically speak out against voter suppression have not spoken out in this case.

“Voter suppression is a fake term. It’s not in the law. The proper term is vote denial,” Adams said. “The voting rights groups are noticeably silent on this case. They don’t show up talking about an actual case of voting denial.”

The Daily Signal contacted several organizations that have opposed policies they labeled as “voter suppression” about concerns over the Michigan case.

“The county clerk in Michigan caught this case of poor management because the system of checks and balances worked,” Christina Schlitt, president of the League of Women Voters of Michigan, said in a statement to The Daily Signal, after this post was originally posted. “These cases are few and far between, but demonstrates why election audits are so important.”

One of the newest such groups is Fair Fight Action, which was started by former Georgia state Rep. Stacey Abrams after her narrow loss in the 2018 Georgia governor’s race.

The group’s website says, “Efforts to discourage and disenfranchise voters—in voter registration, ballot access, or counting of votes—have a catastrophic effect on our democracy and our communities.”

Project Vote warns against “illegal and cynical attempts to suppress the vote and manipulate voters,” adding that “[a]mong the strategies used are voter intimidation and voter challenges.”

Brennan Center for Justice spokesman Derek Rosenfeld said the organization had no comment. But its website says, “Vote suppression has a long and ugly history in the U.S., and over the last two decades, it has resurfaced with a vengeance. Through research, lawsuits, and advocacy, we are fighting vote suppression on every front.”

The silence could be that some of these groups don’t want to acknowledge election fraud, said Hans von Spakovsky, manager of the election law reform initiative at The Heritage Foundation. Or, he said, it could be because Hawkins is a registered Democrat.

“Those 193 votes ultimately counted only because this clerk was caught. Why did the clerk do this? Did she know who they were?” von Spakovsky asked. “Most election officials are honest people who do the right thing, but sometimes election officials do bad things and break the law.”

This post was updated to include a comment from the president of the League of Women Voters of Michigan.