How School Choice Is Breaking Down Barriers in Puerto Rico 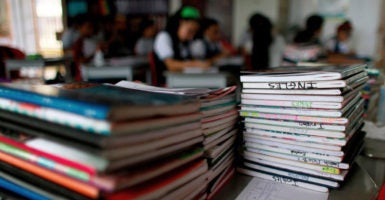 The new year is bringing exciting developments to Puerto Rico’s education reforms. Not only will the U.S. territory open new charter schools, it will also launch a new pilot private school voucher program in the fall.

The need for education reform is most clearly illustrated by Puerto Rico’s National Assessment of Educational Progress results, where students scored multiple grade levels below students in underperforming school districts, such as the District of Columbia and Detroit.

Incredibly, zero percent of Puerto Rican fourth- and eighth-graders scored at the “proficient level” in mathematics.

However, the island took action last year when it opened its first charter school, Proyecto Vimenti, which modeled its curriculum after Puerto Rico’s most prestigious private school.

In a community where more than 40 percent of the population lives below the federal poverty line, the school’s mission to free children from generational cycles of poverty and improve student health resonated deeply with local families.

Proyecto Vimenti’s emphasis on health screenings identified student struggles that might have been overlooked in traditional public schools.

For instance, the school’s initial health screening quickly showed why some children struggled in the classroom: More than half of them suffered from visual impairment and didn’t have glasses. They simply couldn’t see the chalkboard.

The importance of the health screenings is further emphasized by the fact that The 74 Million reported that more than a third of Puerto Rican students in traditional public schools participate in special education, “a rate that far outpaces the national average of 13 percent.”

Puerto Rico Secretary of Education Julia Keleher hoped that more schools would adopt health screenings, which could reduce the number of children in special education and show that children can benefit from “assistive supports for hearing [and] vision,” instead of enrolling in special education courses.

Children best succeed when their education is tailored to their needs. However, personalized education is only possible when families can choose from multiple education options—something Puerto Rico is now working to offer.

A diverse and innovative array of charter schools modeled to respond to the particularities of local communities, such as Proyecto Vimenti, creates an environment where parents can pick the school that is the best fit for their children.

No two children are alike, and in a school district with more students than those of Seattle, Atlanta, and Boston combined, the “one size fits all” system promoted by government officials was insufficient and ineffective.

Parents of children who suffer from bullying, poverty, or sexual harassment, or who have special needs, can use the voucher to pay for private school tuition where their children’s needs are best fulfilled.

Universal vouchers are already popular among Hispanic families, so expanding Puerto Rico’s voucher eligibility and scope would reflect the policy wishes of many in the community, especially in light of the territory’s pervasive poverty.

Puerto Rico should note the success of charter schools and education savings accounts in Arizona. Low regulation empowered parents in the Grand Canyon State to close ineffective charter schools instead of waiting for government officials.

At the same time, the state’s robust education savings accounts ensured that families could afford the education that was the best fit for their children. For example, Max Ashton, who suffers from a visual impairment, used his account to purchase his Braille textbooks, tuition, and assistive technology, such as a talking computer.

Instead of relying on dispassionate government officials, Puerto Rican families should seize their chance to forge new and personalized educational opportunities for their children.

The island began that important work last year, and should continue to expand educational opportunity in 2019.