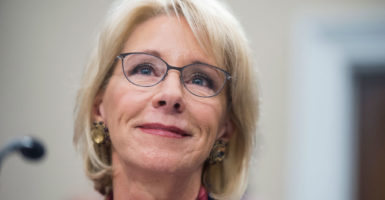 Betsy DeVos received heaps of scorn from the left when she became education secretary, but since taking office last year, she’s accomplished much—and given a good deal of power back to the states. In this episode, Rob Bluey, our editor-in-chief, sits down with DeVos to talk about the progress being made. We also talk to Morgan Walker about what it’s like to be at a major Trump rally.