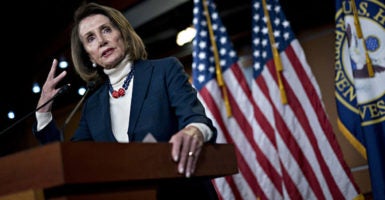 President Donald Trump took action to keep House Speaker Nancy Pelosi, D-Calif., in Washington just minutes before she was set to leave for Europe and the Middle East on a military flight.

“Dear Madame Speaker: Due to the shutdown, I am sorry to inform you that your trip to Brussels, Egypt, and Afghanistan has been postponed,” Trump wrote Thursday. “We will reschedule this seven-day excursion when the shutdown is over.”

This comes one day after Pelosi said Trump should postpone his State of the Union address until the partial government shutdown is over. The speaker has the formal authority to invite the president to address a joint session of Congress.

The Trump letter on Thursday to Pelosi continues:

In light of the 800,000 great American workers not receiving pay, I am sure you would agree that postponing this public relations event is totally appropriate.

I also feel that, during this period, it would be better if you were in Washington negotiating with me and joining the strong border security movement to end the shutdown. Obviously, if you would like to make your journey by flying commercial, that would certainly be your prerogative.

I look forward to seeing you soon and even more forward to watching our open and dangerous southern border finally receive the attention, funding and security it so desperately deserves!

A congressional delegation, not just Pelosi, was scheduled to take the flight set to leave at 3 p.m. Thursday. The letter was sent shortly before 2:30.

“We want to keep her in Washington,” White House press secretary Sarah Huckabee Sanders told reporters. “If she leaves, she guarantees that the second round of paychecks to 800,000 federal workers won’t go out. The deadline to make that deal is midnight on Tuesday.”

Although the Defense Department is not among agencies affected by the shutdown, the president has authority over the entire federal fleet. Members of Congress were reportedly waiting on a bus to board the plane when the letter was sent.

A senior White House official told reporters that as soon as the president learned Pelosi was with the congressional delegation leaving the United States, he took immediate action.

The White House notified the Pentagon ahead of the president’s letter.