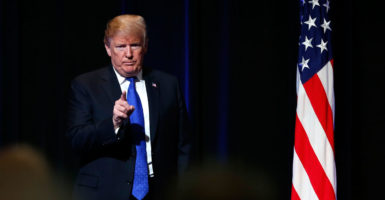 Amid reports that Russia is developing new cruise and ballistic missiles—including one that violates the Intermediate-Range Nuclear Forces treaty—and assessments that North Korea now has a missile that can reach the United States, President Donald Trump visited the Pentagon on Thursday to release a report on America’s preparedness to combat global missile threats, the 2019 Missile Defense Review.

The Missile Defense Review is the culmination of the Defense Department’s year-and-a-half-long assessment of the current global offensive missile threat, along with the United States’ recommended missile defense strategy and guidance for associated weapons programs.

In summary, the Missile Defense Review is a strong and insightful response to the growing missile threat facing the United States and our interests.

The review, while painting a sobering picture of the advancing capabilities of our adversaries, also lays out a thoughtful path to maintaining U.S. security.

The previous Missile Defense Review was released in 2010. There’s a great deal of continuity between the 2010 and 2019 reviews, including several recommendations that have been updated and carried forward.

While there’s a thread of continuity between the two reviews, there’s also change.

The global offensive missile threat landscape has vastly changed since 2010. Iran and North Korea have remained adversaries of the United States, albeit increasing in capability, but Russia and China now pose a vastly greater threat than they did in 2010.

As the review notes, not only are all of these nations rapidly improving their current weapons systems, they are also adding new systems to their arsenals. Of still greater concern, our potential adversaries are working hard to seamlessly integrate those weapon systems into their strategic and tactical military operations.

With regard to regional engagement, this Missile Defense Review underscores the need to make missile defense system solutions “tailored” and adaptable to the existing local and regional defense frameworks and geography.

In terms of the United States’ allies, the Missile Defense Review encourages increased cooperation, integration, and interoperability with allies. While the review places slightly more emphasis on increased contributions from allies, it also streamlines the process through which allies can obtain U.S. defense systems and aid more easily.

In response to this changing threat landscape, the review reclassifies China and Russia as explicit threats to the homeland and recommends the appropriate strategic changes.

Unlike the 2010 review, which advised dialogue with China and increased cooperation with Russia, the 2019 review takes a much more clear-eyed view of these countries.

To protect the homeland, the Missile Defense Review  proposes increasing the quality and quantity of missile interceptors in Alaska, developing new kill vehicles for those interceptors, adding new missile detection sensors to the Pacific Ocean, and studying a new interceptor site in the continental U.S.

The review also suggests investments in new capabilities, such as sensors and lasers, improvements to the U.S. early warning system, and conducting the first test of a Standard Missile-3 IIA against an intercontinental ballistic missile in 2020.

Although the Missile Defense Review accurately describes the increase in threats from Russia and China, it only recommends using nuclear deterrence to counter their ICBMs. That’s disappointing.

Additionally, space-based interceptors, thought by many to have the potential to provide more effective missile defenses, are not given much attention in the review.

While retaining the sensible ideas from the previous review, the 2019 review updates and makes prudent adjustments to the strategy, such as increased interoperability with allies, increased numbers of systems, and “tailored” mobile regional solutions that attempt to integrate local defense mechanisms and geography.

This Missile Defense Review is a strong complement to the Trump administration’s Nuclear Posture Review and National Defense Strategy, and the nation would be wise to follow its recommendations.