Trump Calls for Halt of Funds for California’s Wildfire Recovery 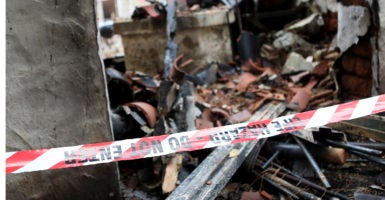 A well damaged by the Camp Fire poses a hazard, according to fire officials, in the town of Paradise, California, Nov. 27, 2018. (Photo: Anda Chu/Digital First Media/East Bay Times/Getty Images)

President Donald Trump released a statement on Wednesday via Twitter signaling he would order the Federal Emergency Management Agency to withhold funding for California’s wildfire recovery. The president cites previous funding as a “waste of money” because of the state’s recurring forest fires, which he attributes to poor state-level land management.

“We should not be looking to cut funding to just punish certain states. But we should be looking to reform our disaster funds to return more responsibility to state and local governments across the board,” David Inserra, a policy analyst at The Heritage Foundation’s Davis Institute for National Security and Foreign Policy, told The Daily Signal in an email.

In response to Trump, Sen. Kamala Harris, D-Calif.,  posted a tweet suggesting the president needs to combat climate change in order to address the issue.

Californians endured the deadliest wildfire in our state’s history last year. We should work together to mitigate these fires by combating climate change, not play politics by threatening to withhold money from survivors of a deadly natural disaster. pic.twitter.com/uMopf0Z05i

Rep. Ro Khanna, D-Calif., also commented that the president has a responsibility to consult science and experts, and his biggest flaw is “not being aware of what he doesn’t know.”

According to Rep. Jim Costa, D-Calif., in an interview with The Hill, Trump is overlooking their current mitigative efforts.

“We’re doing a hosting of new management tools for our forests that are cutting-edge,” Costa said. “And this notion he came up with that raking forests would prevent forest fires is just nonsense.”

While many on the left argue addressing climate change is the viable long-term solution, others such as Rep. Doug LaMalfa, R-Calif., agree that California’s land management is in dire need of reform.

However, LaMalfa was critical of Trump’s remarks; Trump should not conflate the Federal Emergency Management Agency and land management issues, LaMalfa said.

“I share the same frustration with the land management,” LaMalfa said in an interview with The Hill, “but don’t make it about FEMA and the fire victims.”

Prior research from the Reason Foundation points to poor management, regulation, and lack of reducing excess vegetation as root causes of the surge and exacerbation of wildfires in the Northwest.

Recent commentary from The Daily Signal’s Jarrett Stepman, a native Californian, explains that the surge in wildfires can be attributed to the environmental activism and policies that curtailed the U.S. Forest Service’s once-effective management of public wildlands.

For example, according to the Reason Foundation, when the U.S. Fish and Wildlife Service listed the northern spotted owl as “threatened” under the Endangered Species Act, the construction of new roads and the use of existing ones were restricted on 49 million acres of national forests. This “ecosystem management” policy resulted in the reduction of timber harvests, limiting the Forest Service’s ability to thin out the forests and prevent an exacerbation of fires.

Now in its 21st day, the partial government shutdown has caused a pause of funding for both the Federal Emergency Management Agency and the Department of Homeland Security.