What 3 Conservative Lawmakers Want Trump to Do on Wall, National Emergency 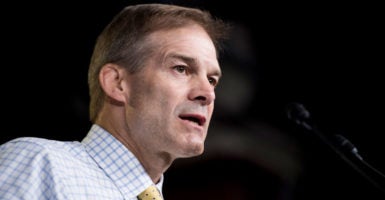 “I think the best approach is legislatively, because if he goes the emergency route, I am convinced it's going to wind up in court ... and that just delays what we all know needs to get done,” Rep. Jim Jordan, R-Ohio, says. (Photo: Bill Clark/Getty Images)

A conservative lawmaker says Congress should appropriate money for a barrier along the southern border so that President Donald Trump does not feel forced to declare a national emergency in order to secure funding for it.

“I think we should do [a border wall] legislatively. I think we should actually appropriate the dollars for a border security wall,” Rep. Jim Jordan, R-Ohio, said Thursday at Conversations with Conservatives, a monthly press Q&A hosted by conservative lawmakers and The Heritage Foundation. “But I do think it’s an emergency, and if the president declares that, then we’ll go from there.”

As the partial government shutdown reaches its 20th day Thursday, Trump has said he is ready to declare a national emergency if Democrats fail to allocate $5.7 billion for a barrier along the southern border.

“I think the best approach is legislatively, because if he goes the emergency route, I am convinced it’s going to wind up in court … and that just delays what we all know needs to get done,” Jordan said.

Rep. Mark Green, R-Tenn., who was sworn in to Congress Jan. 3, said Trump has the authority to declare a national emergency.

“There is some concern out there that we would be giving executive branch power if he did do some kind of a national emergency,” Green said. “That authority is already there, it’s in the act of ’76, so I just want the conservatives out there to know that.”

“In 1976, Congress passed the National Emergencies Act, sponsored by Rep. Peter Rodino, D-N.J. The legislation drew bipartisan support and President Gerald Ford, a Republican, signed it into law,” The Daily Signal’s Fred Lucas reported earlier this week, adding that, “The new law put a statutory framework in place allowing a president to declare a national emergency, with limitations. Mainly, Congress may terminate the emergency declaration if it has the votes to do so. Also, a president must renew the declaration of an emergency after 180 days.”

Jordan also stressed that there is a crisis at the border.

Pushing back against Democrats’ “manufactured crisis” rhetoric, Jordan said, “Anyone who has watched the whole caravan phenomenon over the last several months, how that’s unfolded, knows this is a crisis.”

“If Democrats can get past this position they’ve taken, which is they’re more concerned about stopping the president than they are with helping the country, we can get to a solution and address the terrible things that are going on there,” he added.

“If not, I think we’re in this shutdown for a while.”

Rep. Chip Roy, R-Texas, also a freshman lawmaker, highlighted the past bipartisan backing for a wall.

“Congress has authorized the construction of a fence for the better part of over two decades, multiple times, with bipartisan support, including the support of [Senate Minority Leader] Chuck Schumer and [House Speaker] Nancy Pelosi, so it is important to note that we have spoken as a body … that it should be built, it has been appropriated in the past, we need more appropriation now,” Roy said.

Jordan remarked that “our side is holding strong,” but suggested there might be cracks on the Democrat side.

Sen. Angus King, I-Maine, also said, “There may be places where everybody will agree, ‘Yeah, a wall makes sense there,’” in an an appearance Monday on MSNBC’s “Morning Joe.” But he added: “The problem is [Trump’s] styling this as the wall or nothing and we’re going to keep the government closed. That’s not the way we make policy in this country.”

“What we are seeing, Roy added, “is a real tragedy that is totally avoidable if the leaders of this country do what the American people want.”