During Trump Visit to Border, Families of Slain Officers Call for Border Wall 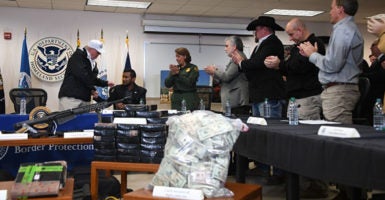 President Donald Trump talks with Reggie Singh after speaking about the death of his brother, Ronil Singh, a Newman, California, police officer, reportedly at the hands of an illegal immigrant. The two met Thursday during the president's visit to the U.S. Border Patrol's McAllen Station in McAllen, Texas. (Photo: Jim Watson/AFP/Getty)

After his police officer brother, who had immigrated to the United States legally, was allegedly killed by an illegal immigrant, Reggie Singh says it’s time for the government to do whatever it takes to stop illegal immigration.

“The way he was killed, what my family’s going through right now, I do not want any other family, law enforcement person to go through,” Singh said Thursday in McAllen, Texas, during a roundtable discussion led by President Donald Trump.

The president was visiting the southern border Thursday amid a partial federal government shutdown over border security funding.

Pablo Virgen Mendoza, who had reportedly illegally crossed the border from Mexico into Arizona, was charged with fatally shooting Singh during a traffic stop in the early hours of Dec. 26.

“Whatever it takes to minimize, put a stop to it, my family really supports it,” the slain officer’s brother said. “At 33 years old, Ronil Singh was cremated. I had to pick him up. It breaks my heart, and no one should ever ever have to go through that.

“Looking at that 5-month-old baby, looking for his dad, no one should ever go through that,” he said.

Trump is in a budgetary standoff with congressional Democrats over funding for a border wall, which led to about 25 percent of the federal government shutting down on Dec. 22.

“Nobody talks about how unfair it is to the victims of these brutal killings,” the president said, surrounded at a table by Customs and Border Protection agents, families of victims of crimes committed by illegal immigrants, and Texas community and political leaders.

Marie Vega was proud of her son, Javier Vega Jr., when he became a Marine and later a Border Patrol agent. She never expected he would be killed while fishing in 2014 by an illegal immigrant.

“Every day, I was scared I would lose my son,” Vega said. “Never in my wildest dreams did I ever imagine my son dying at a family outing. It was supposed to be a peaceful, fun fishing afternoon, but it didn’t happen that way, because we had a criminal illegal alien that killed him.”

She also called for more border security, including the wall.

“No family should suffer the loss of a child,” Vega said at the event. “A parent should not have to bury a child. We need the wall.”

The president also discussed how a wall could stop human traffickers from entering the country.

“They drive, they just go where there’s no security, and you don’t even know the difference between Mexico and the United States,” Trump said. “They have women tied up, they have tape over their mouths, electrical tape … . They have three, four, five of them in vans and back seats of cars. They just drive right in. They don’t go through your ports of entry. They go right through.

“If we had a barrier of any kind, a powerful barrier, whether it’s steel or concrete, they wouldn’t even be able to make that turn. They wouldn’t even bother trying. We would stop it cold,” the president said.

However, during a White House meeting Wednesday, negotiations broke down when House Speaker Nancy Pelosi, D-Calif., said she would not support funding for a wall, and Trump walked out of the meeting.

At Thursday’s event, Customs and Border Protection officials displayed contraband seized from illegal immigrants. Agents pointed to 117 kilograms of methamphetamines and 4 kilograms of heroin seized at a port of entry. Also on display were fire extinguishers used to attempt to conceal and import 100 grams of heroin and some meth.

The agents also demonstrated three Colt handguns, gold-plated and with diamonds, as well as an AK-47 and an AR-15 rifle. Another agent showed off $362,062 in seized cash.

Trump asserted that Democrats support “open borders” and think “crime doesn’t matter.” He also doesn’t understand why Democrats think the tragedies of victims of crimes by illegal immigrants are “manufactured.”