Why California’s Push for ‘Free’ Community College Is So Misguided 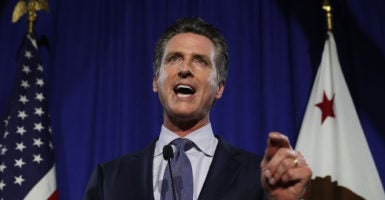 Just when you thought California couldn’t ask any more of its taxpayers, the state Legislature is pushing for two years of “free” community college for all residents, regardless of income.

Last year, lawmakers passed a bill making the first year of community college free. This latest proposal would put taxpayers on the hook to cover the second year, subsidizing all students—even the sons and daughters of the Hollywood elite—to attend community college in the state tuition-free.

Gov. Gavin Newsom, inaugurated Jan. 7, campaigned on the promise of “free” tuition and claims that removing the burden of tuition will encourage students to stay enrolled and finish faster.

Unfortunately, California’s plan to make it possible for students to attend community college tuition-free is riddled with problems that would be a great disservice to the residents of the state.

The most glaring problem with California’s free community college plan is clearly the cost.

California is already a high-tax state, with the highest income tax rate in the country at 13.3 percent. Currently, the state has appropriated $46 million to cover just one year of community college and roughly the same amount is expected to cover the second year.

Second, subsidizing all students, regardless of income level, who attend community college will simply serve to extend the K-12 education system into a K-14 system.

The education system once successfully equipped students with the skills necessary to enter the workforce, and particularly gifted or those interested in an academic track continued on to college. However, now that college attendance has become more commonplace—even expected—high schools no longer make workforce preparation their top priority.

The guarantee of two more years of education will simply spark further degree inflation. A community college degree will become the new baseline, much like the high school diploma once was.

Finally, public spending on community college has been shown to be a risky investment at best.

While some have argued that community college graduation rates are low because many students transfer to four-year schools, only 17 percent do so and complete their degree.

More and more Americans are calling for solutions to the astronomical $1.5 trillion student debt crisis. Reforming the outdated accreditation system that stifles innovation or reducing reliance on federal aid would go a long way in achieving meaningful reform.

However, “free” college will do nothing to address the causes of rising costs, and simply leave Americans with more paper credentials.

Simply obtaining a degree—assuming students graduate—does not necessarily translate to increased job preparedness. It can, however, directly translate to more public debt.

Americans deserve more thoughtful policy solutions to the cost crisis in higher education than faux “free” college. California’s proposal to transfer the community college tuition bill to taxpayers will do nothing to address the root causes of both tuition and degree inflation.

Instead, policymakers should encourage competition and innovation by reducing regulatory burdens for streamlined educational alternatives, such as vocational/career and technical training and apprenticeship programs.